From Italy to Korea via Brazil

The ERGON® Living and COMPACK Living® opening systems are revolutionising the door sector: two pieces of undeniably innovative hardware which are touring the world via specialist trade shows and projects run by major architecture and design firms.

From 10-13 May 2018, the “47th MBC Construction Expo 2018” was held at the KINTEX Exhibition Center in Seoul (South Korea) and Celegon Srl introduced its two most important door opening systems: the ERGON® Living swing-and-slide hardware system and the COMPACK Living® system for folding doors in two versions: 90 degree and 180 degree opening.

By halving the overall space requirements, COMPACK Living® is ideal for both private settings as well as contract ones, where it best displays its ability to provide for a large number of close doorways in very little space and to create new openings in rooms already furnished or already in use.

Designed in collaboration with Massimo Bonetti Design, one of the most successful Italian designers, it can be applied to any type of standard leaf or frame, as well as partition walls, walk-in wardrobes and store cupboards. The movement is fluid and quiet, just like a traditional swing door system and is patented and guaranteed by tests of over 100,000 cycles. COMPACK Living® is simple to install and needs no building work and no sliding tracks or external rollers.

But the COMPACK Living® system is not the only star of the Korean trade show. At its side, Celegon Srl presented ERGON® Living, the swing-and-slide hardware that has revolutionised the sector, introducing a unique, completely new system compared to traditional systems of swing door, folding door and sliding door.

ERGON® Living was also on show last April at the CASACOR 2018 event for architecture and design, in San Paolo in Brazil, one of the capital’s most important design events. The double-leaf door was on show in the space assigned to the firm led by João Armentano, a renowned architect who has worked on innovative architecture and design projects around the world, in collaboration with Eclisse Brasil, for over 30 years.

With the simultaneous rotation and swing movement of the door leaf, ERGON® Living is the swing-and-slide hardware that reduces space requirements by 50% without the need for any building work: problems of obstruction between close doorways are eliminated whilst the potential for the living space is increased.

Because the door can be opened from both sides and works with a simple push, the ERGON® Living system is particularly suited to public spaces, and those areas tied to the issue of emergency exits and use by people in wheelchairs.

The hardware kit can be used on a wide range of doors with various characteristics, with large or small dimensions, in hollow-core wood or solid wood, or plastic, or even with glass. Suited to the most varied production requirements, ERGON® Living comes in a hollow-core, 40 mm thick door version (ERGON® Living S40) and 35 mm leaf with vertical leaf rotation in the jamb with post (ERGON® Living T.E) or in the floor jamb (ERGON® living T.E. Slim). Finally, the hardware is available already mounted on the doors in the ERGON® Community line. 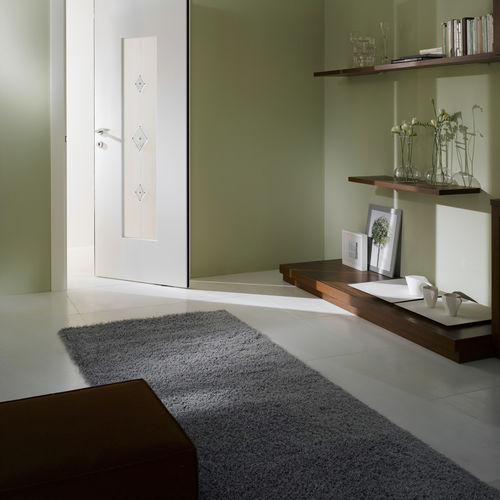 Celegon S.r.l. presents Push & Go Evo, the new magnetic unlocking system for secondary doors. With double-panel doors, the second panel is usually unlocked by means of a chain lever. Positioned at the top and bottom of the door panel, the chain is cumbersome to reach and requires significant force to be both locked and unlocked, making opening and closing the door impra...

COMPACK® Living is the hardware system for folding doors which reduces the amount of space occupied by the door, thus increasing living space. Using a special patented hinge applied to the top of the door, COMPACK Living® 180° allows the door to be folded flat against the wall, opening 180 degrees. It is easy to see how on single leaf doors the swing space when openi...

ERGON® Living is a swing-and-slide hardware system that has revolutionised door closure systems, expanding construction possibilities of door manufacturers and designers, and interior design solutions for architects and surveyors. Thanks to the swing and slide system, doors fitted with ERGON® Living occupy 50% less space when opened and closed, for a significant space...