The philosophy less is more encapsulates the design hallmark of Hollin+Radoske architects from Frankfurt. True to form, their store concept for HUGO BOSS is incredibly minimalist yet emotional. They reinterpreted this principle once again in the award-winning Turkish shopping mall Istinye Park in Istanbul. For the first time ever, the architects used metal fabric from GKD – Gebr. Kufferath AG to cover the walls of the archetypal staircase made from glass and black steel that connects the upper and lower stories of stores all over the world. Its textile skin contrasts with the cool shimmer of the woven stainless steel and subtly underlines the purist design.

The Istinye Park shopping mall was opened in September 2007 after just 26 months of construction. 300 stores of the world's most coveted luxury brands invite you to stroll around, to shop and to dream, while several cinemas as well as fitness and lifestyle centers round off the attractive concept. What’s special about it is that some of the stores are located in the light-flooded hall under a huge glass dome while some are located outside the mall. Here, lines of stores have been built on either side of a large open-air restaurant with integrated pond, trees and green spaces, which has become a popular meeting place in Istanbul. Instinye Park has won numerous awards since it opened, including Europe’s Best Shopping Mall in 2009. The two-story HUGO BOSS store is also located on the left flank of the outdoor area. In their interior design, Hollin+Radoske combined the clean lines typical of HUGO BOSS with a sophisticated interplay of colors and materials, a concept they used for the first time in the flagship store on the Champs Elysées in Paris.

Large sand-colored tiles, lots of glass and black steel stand in contrast to wooden benches with a soft leather finish. Flat, staggered pedestals were covered with felt in different shades of gray, providing a subtle platform for the product presentation, matched by the discreet colors of the interior design. In keeping with this concept, the wall and ceiling panels used to partition the space are given the same color as the floor and blend into the background. In addition, ceiling-height mirrors are used to give the store a feeling of spaciousness and brightness. Cabinets with black bases provide effective means for displaying accessories. Their cuboid shapes made from steel and glass are fitted against the stringers of the staircase, which is inserted perpendicularly in the room. It connects the two stories and at the same time emphasizes the clearly structured spatial organization of the store. The glass stringers protruding into the room also provide a clear view of the product displays on the opposite side. A crystal chandelier made from stylized icicles typical of all HUGO BOSS stores hangs over the stairwell. The rear wall of the staircase was lined on both floors with a total of eight panels, which were made from GKD’s Dolphin stainless steel fabric and were tailored precisely to the distinctive flow of the stairs. The plastic woven structure made of wires and cables provides an extravagant backdrop for the textile luxury for which the HUGO BOSS brand stands. Meanwhile, carefully targeted illumination produces symmetrical beams of light on the fabric, elegantly highlighting its metallic shimmer. 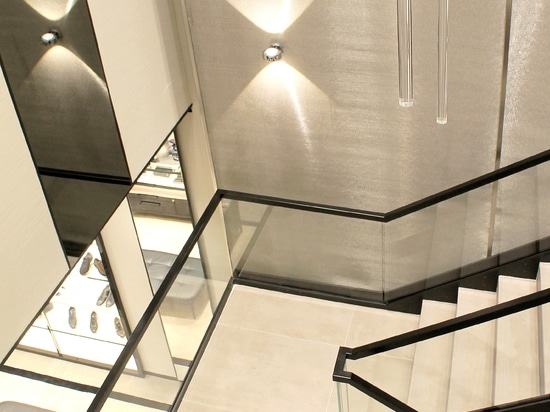 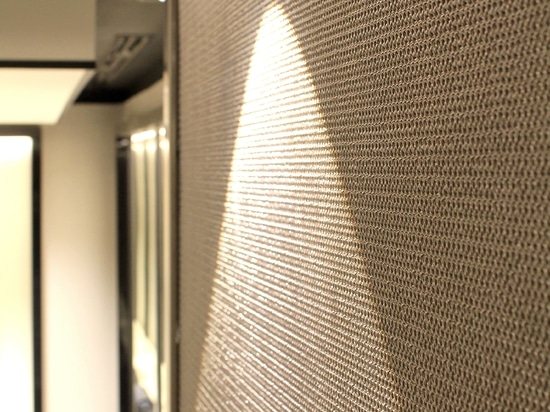 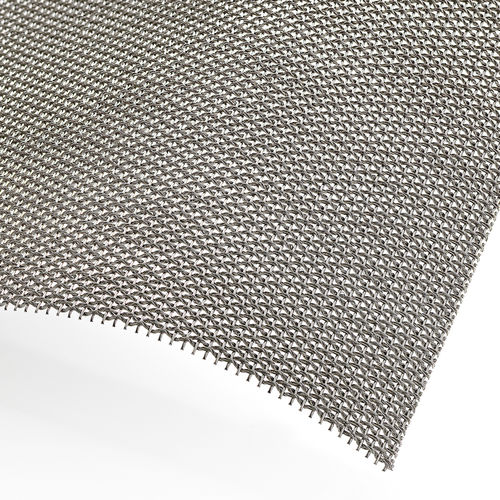