Since taking off in their first motorised aircraft, the Wright brothers have been hailed as the pioneers of aviation. Their incredible efforts also made their home town of Dayton, Ohio in the Northeast US famous as the birthplace of manned flight. Aviation was therefore the logical theme when redesigning the facade of the local Dayton Convention Center. The central element employed to make the curved glass facade at the entrance of the building even more eye-catching is a rotunda that has been clad in GKD metallic mesh.

In 2008, the Dayton Convention Center was comprehensively remodelled. Alongside a new coat of paint for the facade, the renovation work also comprised a modernised foyer for the building. Covering an area of around 30,500 square metres (328,000 square feet), the venue offers versatile space for events such as trade fairs, conferences or even private parties. The redesigned foyer also serves as a perfect reminder of this city's history. A three-storey high rotunda made of GKD metallic mesh is reminiscent of an airport tower and matches the curved shape of the facade on the northeast side of the building. The planners from Flynn Architecture were keen to create a striking showcase to welcome visitors to the Convention Center, so they elected to cover the round construction with 70 panels from the Escale 7 x 1 mesh range over a total area of around 1,800 square metres (19,400 square feet). In fact, construction of the tower would have been impossible without the flexible texture of the metallic mesh. Alongside the high-tech aesthetics of the mesh, functional properties such as its maintenance-free nature, robustness and unlimited durability made this material the only logical choice. When inside the building, guests enjoy an unobstructed outward view thanks to the transparency of the mesh. At the same time, the spiral mesh serves as protection from undesired sunlight, thereby maintaining a pleasant temperature inside the venue's rooms 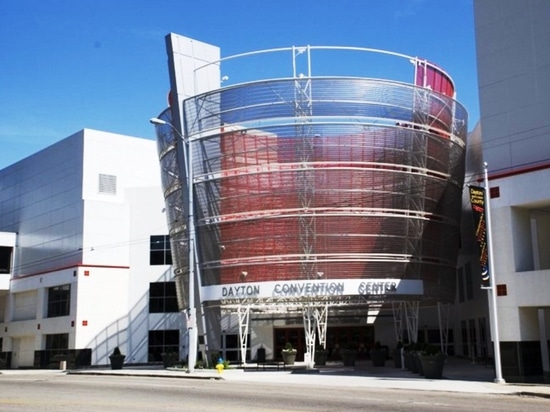 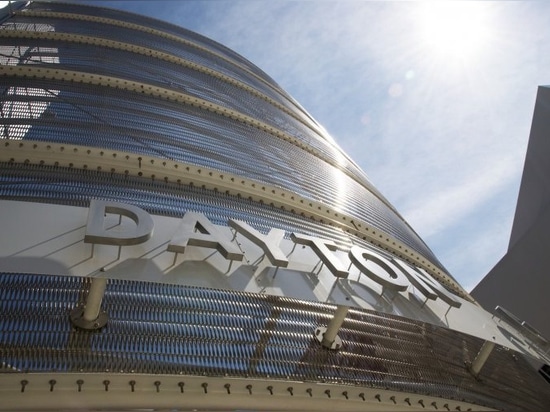