The Indemann was designed by the Maastricht architecture firm Maurer United Architects as a symbol of the exemplary structural-political evolution of a former mining region. This 36 meter high, accessible steel sculpture, built on a brown coal dump near Inden, resembles a primitive robot. The Indemann gets its unique radiance from Illumesh®, a semitransparent skin made of stainless steel mesh with interwoven LED profiles. During the day, the metallic surface shimmers and reflects light, then at night, a spectacular computer-controlled light show comes to life. In Germany the system has been used only once: on the Indemann.

The 270 ton steel sculpture, adjacent to the busiest autobahn in Europe, the A4, serves as a visual symbol of progressive planning for the future. The Indemann extends his arm to point out the evolving landscape. Three observation platforms, the highest 192 steps above the ground, invite visitors to enjoy a breathtaking view of the region. The cladding, made of 1470 square meters of Illumesh®, is riveting. The woven, transparent stainless steel shell uses clever reflection techniques to melt the stark, geometric silhouette of the Indemann and allow it to blend into the surrounding landscape. Then at night, the regal landmark really knows how to shine: Vast light and color compositions are projected onto the shimmering material by 256 LED heads positioned in front of the stainless steel mesh. The intensive colors reflecting off the round stainless steel wires create the impression of a three-dimensional hologram. With over 40,000 LEDs, each of which can be separately controlled by computer, the illuminated Indemann symbolizes a bright future and is also a popular tourist destination. A ticker serves as the popular figure's mouthpiece. Organic and geometric shapes form the focal point of the media projection. With fascinating color combinations, the abstractions express the evolution from a coal dump to an amusement park and an innovative economic area. And so the Indemann is truly a landmark with a vision.

The high resistance to the elements of the transparent facade made of Illumesh® reinforces the sustainability of the concept. With its minimal maintenance and power consumption, the system always performs to convincingly high standards even in a long-term perspective. 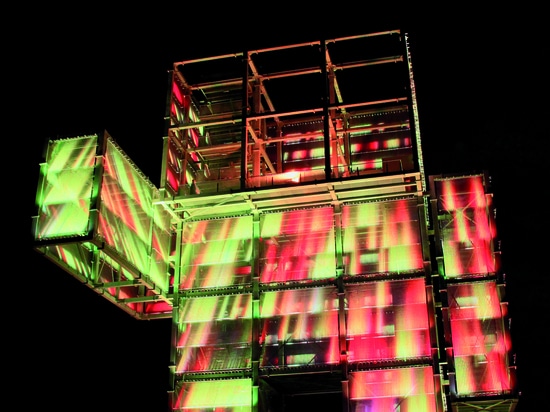 The organic colours and shaping of the Indeman allows to blend it into the surrounding landscape. © GKD 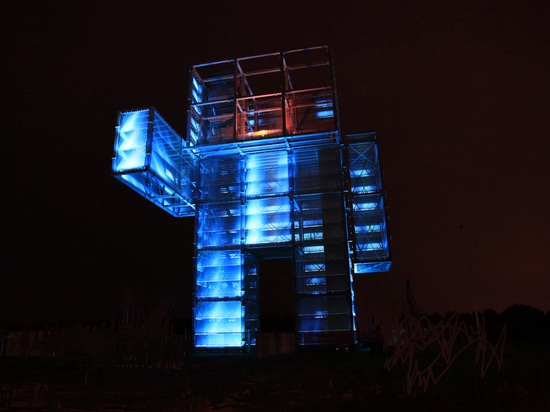 Designed by the Maastricht architecture firm Maurer United Architects, the Indemann extends his arm to point out the evolving landscape. © GKD 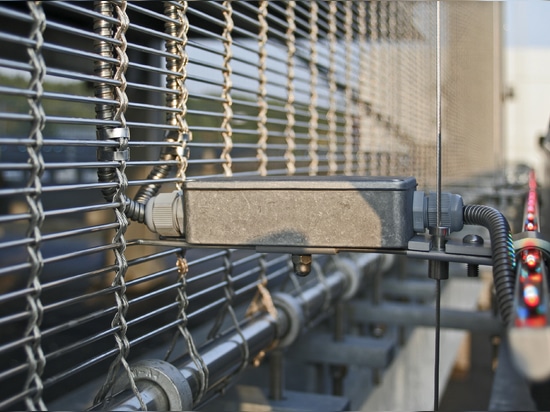 The stainless steel wire mesh is illuminated indirectly by the LED-tubes. © GKD