Between 1930 and 1932 the architect Martin Elsaesser planned and constructed a villa in the Hamburg suburb of Othmarschen for the tobacco magnate Philipp F. Reemtsma and his family. Taking into account the cost of building and furnishing the villa and the investment in its many and varied works of art, the cost of the project was rumoured to be 4 million reichsmarks, making it the most expensive private dwelling in Germany. At the time Elsaesser, who is almost forgotten today, was director of building development in Frankfurt am Main and, in a competition held by Reemtsma, was victorious against the much more famous Henry van de Velde.

At the request of the client for discretion the villa was referred to anonymously in all contemporary publications as "Haus K. in O.", "K" for "Kreetkamp" the original designation of the area where the site was located, and "O" for Othmarschen. As a result it was almost impossible to identify the location of the villa or who its owner was – in addition the circumstances of the time, the Nazi concept of architecture and art as well as the subsequent world war ensured that for decades the villa was left undiscovered for what it was, an outstanding and unusual work of classical modernism. It is only being rediscovered today as a historical building of architectural interest. The publishers Gebrüder Mann Verlag have now produced a comprehensive and technically well-researched portrait of the villa, providing ground plans, historical and present-day photos as well as a number of essays which offer a real insight into this residence, which was once so private and discreetly hidden.

Historical photos show a three-storey composition of asymmetrically arranged cubes. The buildings with their flat roofs, the railings and completely tiled surfaces make such a factual impression that they are almost reminiscent of sober utilitarian buildings multi-storey car parks or a swimming-pool complex. The interior with its near 2000 m2 of living space was furnished by Elsaesser down to the last detail. With the greatest of care he commissioned the leading craftsmen of the time to produce specially designed lamps, carpets and wall coverings as well as, for example, Japanese grass wallpaper, matt-finish plum wood dressing tables, macassar ebony beds, white gold ceilings, shell limestone floors, black bembe parquet, fitted liquor cabinets, tapestries, reliefs and sculptures. The panorama windows, which sink into the floor to reveal an arrangement of elegant tubular steel recliners with a grandiose view of the park, are just one of many special features such as the villa's own riding stables with an equestrian arena, greenhouses as a "glass garden", cinema, rooms for table tennis, gymnastics and massage, indoor swimming pool with diving board and "air bath", tea house, two separate wine cellars, tennis pavilion and court, estate buildings with garages, living accommodation for the married staff as well as a house for the gatekeeper together with a lodge. Parts of the original private gardens, designed by landscape architect Leberecht Migge to provide a synthesis of kitchen garden and pleasure garden, are nowadays open to the public and known as the "Reemtsma Park".

And yet in spite of its definite claim to major status and huge function rooms the house does not in the least make the kind of embarrassing nouveau riche impression that is given off by so many of the "Neuschwansteins" which are nowadays often built by and on behalf of the wealthy. In fact Elsaesser made use of understatement to create a "personal family home" and not a bombastic palace. To quote the architect himself: "In contrast to the standard residential house, which has to be suitable for general living requirements, the personal residence is the result of detailed and continual dialogue between the owner and the architect." 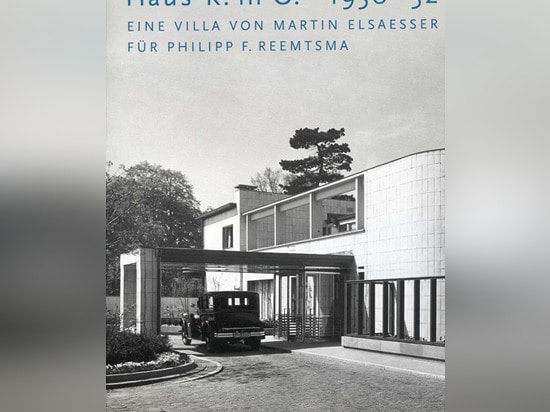