Now that borders and boundaries are increasingly under question and advanced spatial analysis can reveal as much about social landscapes than physical ones, the infographic and the map have taken on a renewed significance. Wall Street Journal columnist Anthony Paletta takes a look at the website radicalcartography.net for uncube and explores a digital landscape that takes us from Pheonix to French kisses and, of course, beyond.

Cartographer and historian Bill Rankin’s radicalcartography.net, a go-to site for map geeks, features an “about” section that consists solely of a Baudrillard quote. The passage, discussing Borges’ On Exactitude in Science, which imagined a map whose scale was that of the empire that it mapped, continues:

“Abstraction today is no longer that of the map, the double, the mirror or the concept. Simulation is no longer that of a territory, a referential being or substance. It is the generation of models of a real without origin or reality: a hyperreal. The territory no longer precedes the map, nor survives it. Henceforth, it is the map that precedes the territory – PRECESSION OF SIMULACRA – it is the map that engenders the territory and if we were to revive the fable today, it would be the territory whose shreds are slowly rotting across the map. It is the real, and not the map, whose vestiges subsist here and there, in the deserts which are no longer those of the Empire but our own: The desert of the real itself.”

This, about as esoteric as an “about” page can get, might suggest contents of formidable complexity, and yet the maps on offer, if surely more unusual, are generally as scrutable as any others you’ve encountered. Rankin’s collection of maps are not an interrogation of the form itself but of the limited ways it usually appears. The maps that engender our sense both of territories we know, and those we do not, predominantly cover a very small number of varieties: the road map, the political map, and the geographic relief. Rankin’s undertaking is to take those many shreds of the real that are less often represented and to vitiate those means of representing and conceiving of the world and any number of places. As he commented in a Guernica interview recently:

“Overall I’d saw that there are two ways I’m trying to radicalise cartography. The first is to place more emphasis on social landscapes, rather than the physical landscape alone. This means no longer seeing the road map or the aerial photo as the default. The second is to reimagine boundaries. Most of what we know about boundaries comes from maps, and by making new kinds of maps we can start to think about boundaries in new ways.”

It’s a mistake to associate this undertaking too closely with radical politics, although many of his maps have very clear political implications: Rankin’s emphasis, as he noted in the same interview, is on “a radical process, rather than just radical content”.

Prevailing modes of mapping are inextricably connected to geopolitical entitites: all roads no longer lead to Rome but all were built by a state to lead somewhere. The map of boundaries of any sort is entirely a political construct. There are also, of course, natural maps, which, in the age of satellites and Google maps have achieved the perfect representation of geographic form after which centuries of human surveying toiled.

The satellite photo is an entirely accurate representation of earth from above, but, crucially, it is not in itself a map. It is the act of adding text or highlighting features that creates a map. This is a craft that is both intrinsic and intrinsically deceptive. As Mark Monmonier notes in his book How to Lie With Maps (University of Chicago Press, 1996):

“Not only is it easy to lie with maps, it’s essential... To avoid hiding critical inofrmation in a fog of detail, the map must offer a selective, incomplete view of reality. There’s no escape from the cartographic paradox: to present a useful and truthful picture, an accurate map must tell white lies.”

Some deceptions can be immense: wartime portraits of things that aren’t there, for example, but the vast majority are simply necessary. A map that contained all possible information about the location it depicted would be an impenetrable forest of text. No, a map selects what it wants to convey, and in the case of a road or political map does so generally very effectively. The rut is in conceiving the world only in these ways, and within these frames. Franco Moretti wrote in his book Atlas of the European Novel (Verso, 1990) that mapping “is not the conclusion of geographical work; it’s the beginning. After which begins in fact the most challenging part of the whole enterprise: one looks at the map, and thinks.”

Political maps are, of course, often used as a frame for information more sophisticated than just the names of provinces or states, but the hegemony of their political-boundary-sized increments can obscure much more effective modes of visualisation. One of Rankin’s most popular map series represents concentrations of population by dots - dots representing, say, 25 persons on a range of city maps present a vivid and often block-scaled portrait of income, education, and racial differences. Replacing typical chunks of colour with pointillist tapestries in this way offers a much more vivid portrait of the immense divisions of racial and economic division in American cities, which, even when, in the case of Washington DC, reveals plenty of middle and upper-income non-white neighborhoods, still offers a portrait of persistent segregation:

“While at a glance race, income, education, and crime all seem to overlap, it’s certainly not true that all black neighbourhoods are poor and plagued by crime and all white areas are rich and crime-free – the key variable is education, not race.”

Rankin’s determination to mine data in ways typically forgotten leads to a vast and fascinating range of data: his site includes maps on underdevelopment in Manhattan, Native American reservations, public housing in New Haven, US Federal Land, and many more. A map of the Phoenix area, for example, looks not merely at the present but the possible future of sprawl, displaying land around the metropolis by the full, partial, or absent restrictions on eventual development.

Many don’t carry any such weight, but are reliably fascinating: a map of pedestrian and gondola routes in Venice, counties named after presidents in the United States, a comparison of city sizes to the smallest American state, Rhode Island. Others are downright fanciful: a map of the number of kisses used as greetings in France. One of his most conceptually sophisticated maps concerns a topic as trivial as the nebulous meaning of the American Midwest: it’s derived from 100 other maps, in that rarest instance where cartographic authorship is foresworn in order to present a shaded aggregate of what this term entails.

Rankin is not merely an innovative creator, he’s a nimble curator, offering a range of favoured maps from 10th Century Persian maps to contemporary mall store directories under the apt heading “Yummy”. His book After the Map: Cartography, Navigation, and the Transformation of Territory in the Twentieth Century, will be published in the US in June. Until then there’s Radical Cartography. 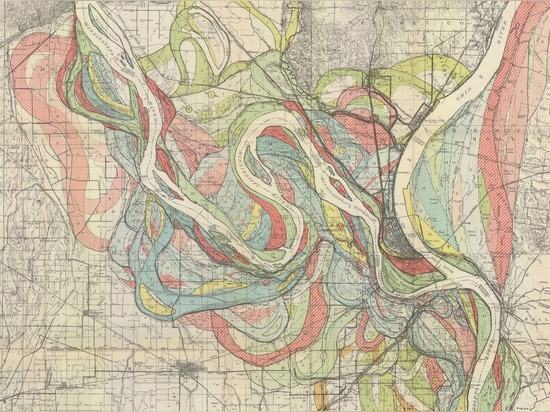 Map of the historical meanders of the Mississippi river (detail), by Harold Fisk, 1944. 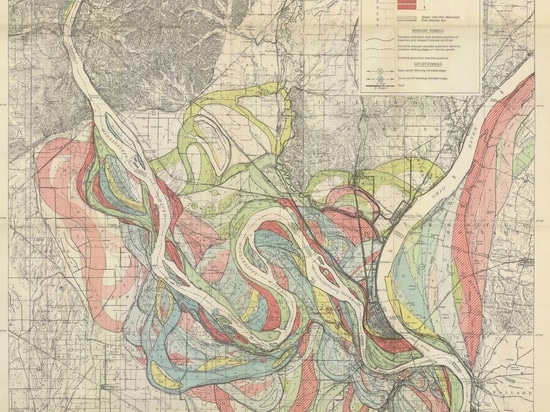 Map of the historical meanders of the Mississippi river, by Harold Fisk, 1944. 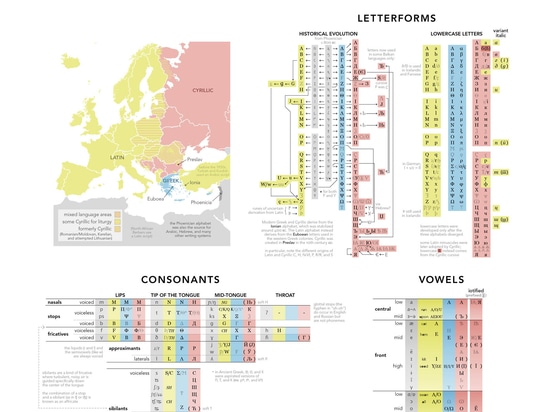 The distribution and evolution of the alphabets of Europe. (Map: Bill Rankin) 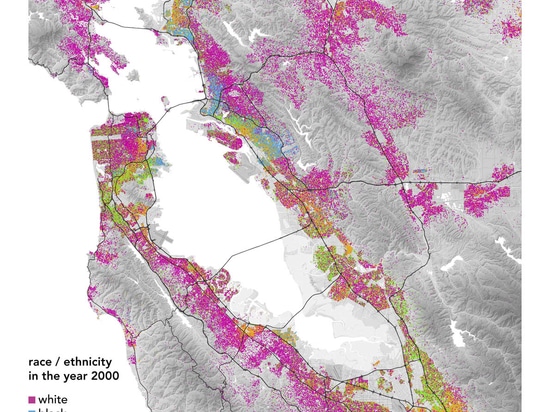 Concentration of racial groups in the Bay Area in 2000 – as shown in one of Rankin’s popular pointillist maps. (Map: Bill Rankin) 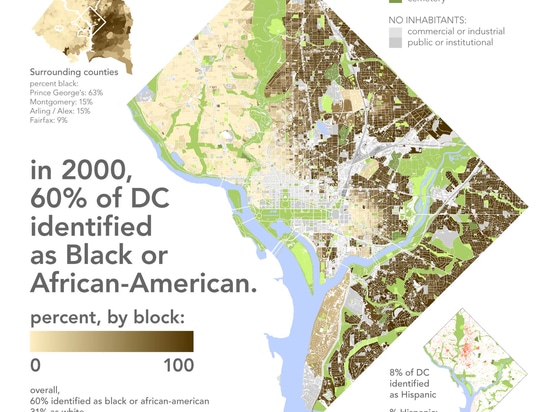 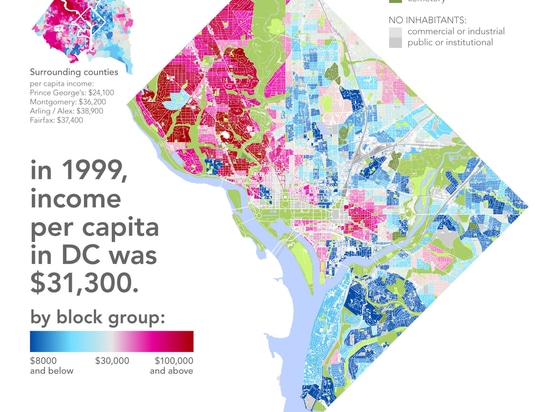 “While at a glance race, income, education, and crime all seem to overlap, it’s certainly not true that all black neighbourhoods are poor and plagued by crimed and all white areas are rich and crime-free...” (Map: Bill Rankin)&am