The expansion of Jerusalem in the years following the 1967 Six Day War brought with it a period of conflict in architectural aesthetics; between a historicised image of an ideal Israeli past and the experimental geometrics of the European avant-garde. Like Zvi Hecker, to whose work we dedicated uncube issue no. 41, Eldar Sharon formed part of the latter group, utilising the techniques of pre-fabrication and “space-packing” in a residential neighbourhood in Gilo, south Jerusalem. Writer and photographer Gili Merin visited the site for uncube to trace the troubled history of a structure that never quite settled in.

On a hill above Jerusalem, Gilo is one of the largest of the eight “Ring Neighbourhoods” surrounding the city, built by Israel on newly occupied land following the 1967 Six Day War. With these neighbourhoods, the intention was to strengthen the capital’s peripheral Jewish presence and consolidate the “Greater Jerusalem Area”. Established in 1973 and named after the nearby Palestinian village of Beit Jala, Gilo is a prime example of what would later be regarded as the first appearance of Israeli Postmodernism: oversized, widespread and loaded with symbolic elements. Drawn from ancient Jerusalem, these architectural gestures encompassed not only aesthetic elements such as arched windows and pathways, but also certain introspective typologies of the Old City. Continuous, wall-like housing and enclosed inner courtyards, for example, were incorporated in the new “clusters” – a terminology favoured by the Ministry of Housing, keen to re-establish biblical affirmation of the occupation.

Within this highly political new style and with occupation on the rise, the country’s most notable architects were enlisted to build large-scale state-funded projects. With the ensuing 1970s building boom, Salo Hershman, Moore Yaski Sivan, former brutalist Ram Carmi and others embraced this new style and its typological requirements. Counter to this hegemonic building style, two former protagonists of Israeli Structuralism and former partners along with their mentor Alfred Neumann, Zvi Hecker and Eldar Sharon, designed alternative compounds of similar scale on opposite sides of the city. Both drew from the space-packing doctrines of Neumann, but while Hecker created his Ramot Polin project based on polyhedral modules drawing inspirations from sunflowers and beehives, Eldar Sharon created a different model based on simpler, more rectangular modules. Joining forces with his own father, the Bauhaus-educated early masterplanner of the Israeli state, Arieh Sharon, the duo designed and constructed a housing project in the raidly developing southern neighbourhood of Gilo.

The Sharons’ new compound was based on a modular 4.5 x 2.6 metre grid and constructed of thin slabs stacked diagonally and accessed via an exterior staircase. Each of the 288 apartments is entered via a balcony enclosed by an angular wall, allowing light to enter the units and resulting in the geometrical appearance of the structure. Like Hecker’s Ramot Polin units, these trapezoid elements became the main target for alterations by the tenants, who later “filled” their negative spaces with constructions of various materials (plastic, wood, concrete, stone) and reduced their playful morphology into rather more practical rectangular enclosures.

Their “Gilo Housing Project” was completed in 1975 and, despite being intended as permanent housing, was used straight away as an “absorption” centre – a transitional hostel for large numbers of new Jewish immigrants from Iran, Syria, France, South America and elsewhere. The buildings, however, turned out to be virtually uninhabitable as the constant flux of its inhabitants led to poor maintenance. Over the next few years, the immigrants left the compound in favour of more permanent residences, making way for a group of squatters who formed an idealistic socialist community, a so-called urban Kibbutz named Beit Israel, in the 1990s. Comprising 35 families and a few dozen singles, the commune functioned under one fiscal system and shared joint meals, after-school education and prayer sessions. The complex was then gradually bought out by Amidar, a state-owned housing company, who subsidised rents. The squat was legally recognised and the squatters continued to work rigorously on bottom-up alterations to the neighbourhood with amateur murals, newly painted railings and community gardens.

Like Hecker’s Ramot Polin project, the Sharons’ housing unit has been significantly adapted since construction...

Unfortunately there is only so much that can be achieved with makeshift solutions. In 2014 the municipality of Jerusalem announced a plan for the partial destruction of the complex, substituting it for a private development of high-density residences composed of seven 21-storey towers, 2,300 underground parking spaces, and 1,000 square metres of retail space. Only 80 of the 288 families who now live in the compound were able to buy their apartments from Amidar and will be given one of the 1,100 new units; the rest will be moved into yet another of the low-cost homes that Amidar are known for.

It seems as though these two independent projects Ramot Polin and the Gilo housing by Alfred Neumann’s former protegees’ and partners, both of whom were essentially enlisted by the state for occupational purposes, have become little more than photogenic displays of morphological studies. Individually or as a group, formally or haphazardly, only the tenant’s own “improvements” to these formalistic architectural gestures was able to stall the rapid inbuilt decline, and prolong the life of these buildings for a while, until, inevitably, they have to make way for further capital and ownership aspirations. 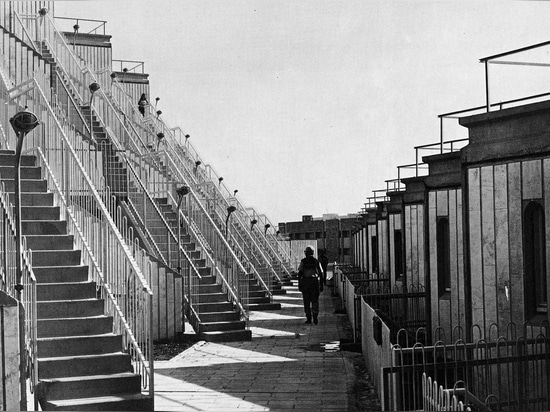 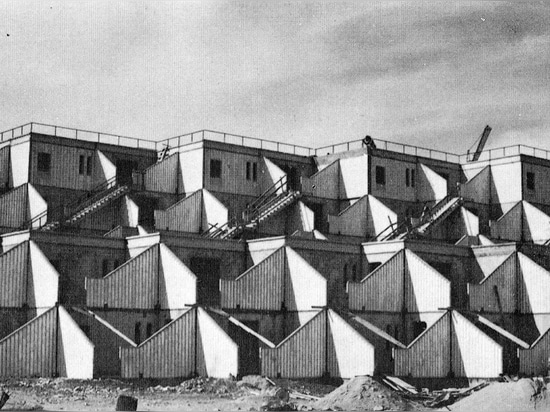 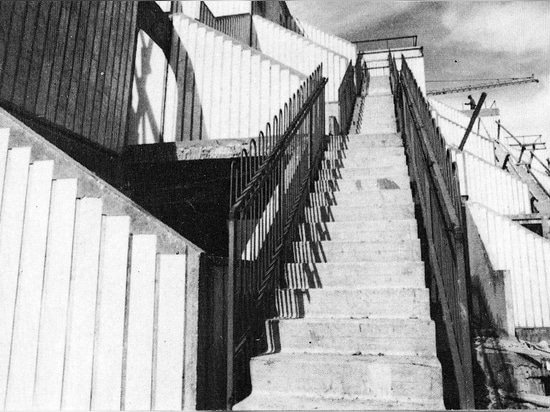 ...in favour of the space-packing geometrics practiced and preached by Zvi Hecker and Alfred Neumann. (Image courtesy Arieh Sharon office) 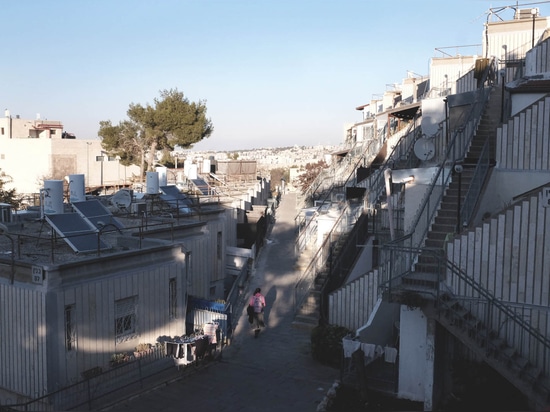 The compound was based on a modular 4.5 metre by 2.6 metre grid... (All photos by Gili Merin, unless otherwise stated) 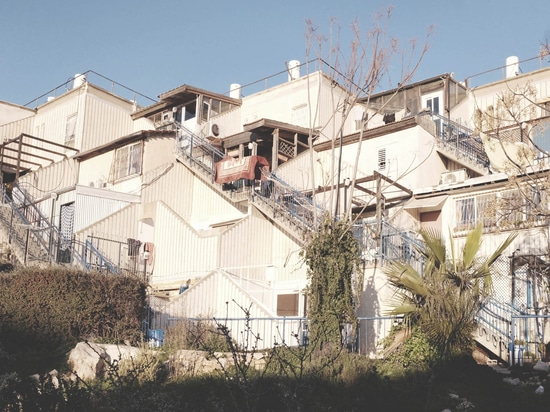 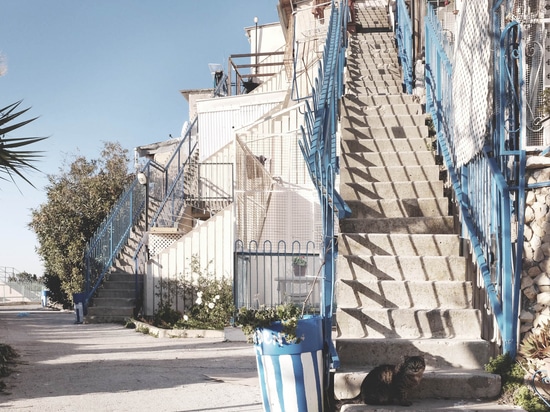 ...and accessed via exterior staircases.