In the new film EX_MACHINA, while the star of the show is undoubtedly living machine Ava, played by Alicia Vikander, the machine-for-living-in architectural setting, which in real time is a Norwegian hotel designed by Jensen & Skodvin, plays an impressive supporting role. Fiona Shipwright muses on life and nature up in the wild north.

“To erase the line between man and machine is to obscure the line between men and gods.” So proclaims the trailer of Alex Garland’s sci-fi thriller EX_MACHINA, which this month is hitting screens in the US and most of Europe after earlier release in the UK and elsewhere. The star of the show may be a highly sophisticated piece of AI but no less impressive is the architecture that serves as a backdrop for all that near-future dystopian narrative. Jensen & Skodvin’s project in the heart of western Norway’s Gudbrandsjuvet Gorge may not fuse man with machine but it certainly goes to great lengths in its attempt to blur as far as possible the line between architecture and nature.

The film’s production design and dazzling visual have garnered much attention already, notably those employed to realise the humanoid form of Ava (Alicia Vikander), who models an arresting combination of translucent torso with an uncannily human face. The storyline sees superstar programmer Caleb (Domhnall Gleeson) win the golden ticket in a company-wide competition to spend a week with dotcom billionaire and CEO Nathan (Oscar Isaac), in his Alaskan bolthole (which is seemingly only accessible by helicopter, naturally). Upon his arrival, Caleb learns of the real reason he is there: to undertake a version of the Turing Test – that originally conceived by Alan Turing in 1950, based upon a simple question: can machines think? Ava is then revealed to Caleb as a test subject – or so it seems...

Early on in the narrative, Nathan cryptically explains to his guest: “in many ways this building isn’t a house – it’s a research facility”. But in real life, Nathan′s house is not a research facility either, it is actually a hotel. The architectural setting that works so well in providing such a brooding, tense atmosphere for the tripartite cast to work within is in fact the various different buildings that make up the “rooms” of the Juvet Landscape Hotel. Rather than coming from the Blade Runner-esque realm of the near future, the project was designed for owner Knut Slinning by the Norwegian practice headed up by Jan Olav Jensen and Børre Skodvin, with the first phase of its construction completed in 2008.

Within the world of EX_MACHINA, Caleb may not find much to relax about in the place, but your average hotel guest does not in fact find himself charged with questions of philosophical dualism upon arrival. Instead, the emphasis is placed firmly upon awareness of the stunning surrounding environment, with each room sited and designed to maximise privacy whilst affording uninterrupted panoramic views. Each building has been designed in a responsive manner to its immediate environment – be it the sharp incline of a rock formation or lofty outcrop of surrounding forest. The glazing is framed as minimally and unobtrusively as possible whilst interiors are treated with black pigmented oil to prevent unwanted reflections interfering.

The hotel has currently a total of nine rooms – with plans for more to follow. The two most recent ones were completed in 2012-13, and their design follows the principles of the architecture of Norwegian Stubbur houses – traditional food store buildings built raised on stones to prevent unwanted visitations from foraging rodents – which also references the site’s history as a corn seed farm dating from the sixteenth century.

Referred to as “the bird nesting boxes” and more minimal in design than their predecessors completed during the earlier phase, these eight metre square structures play on their heritage roots, making use of traditional materials and techniques which are still employed by local craftsmen today, whilst also introducing a more contemporary feel via the oversized windows which are set directly into the wood.

Rather like its cinematic alter ego, the project came about thanks to an initiative looking to bring about new life. However, this one didn’t originate in Silicon Valley, but in a Norwegian Government initiative which has invested in a scheme to regenerate the country’s National Tourist Routes. Rather than trying to overcome the difficult nature of the terrain upon which many sites of interest lie, the programme embraces the Norwegian capacity to adapt to arduous topography, stating, “the architecture should facilitate the experience of nature, while also appearing as an attraction in its own right”. This seems to be exactly what Jensen & Skodvin’s ensemble of buildings that make up this hotel has succeeded in doing – just so long as the nature in question is of the incontrovertibly natural variety… 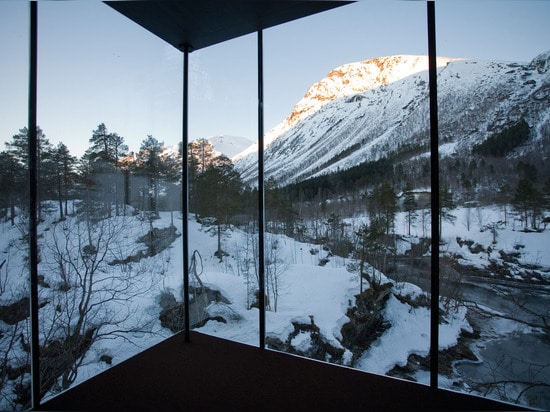 Life, but perhaps not as you know it: a room at the Juvet Landscape Hotel in Norway. (All photos: Jensen & Skodvin Architects) 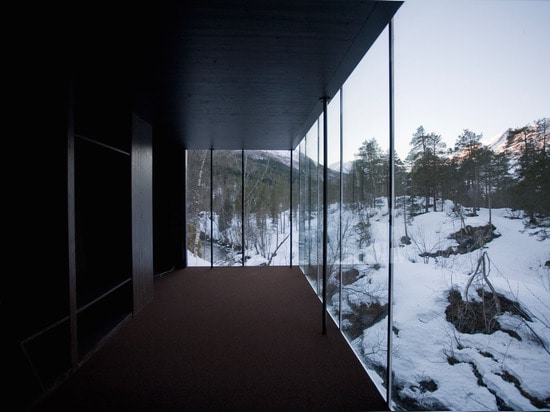 With glazing maximised over the spectacular surroundings. 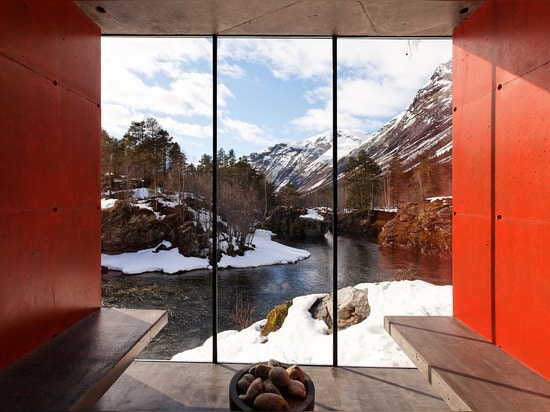 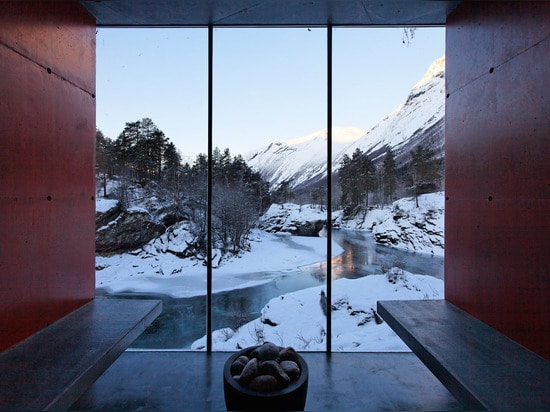 Each structure is an individual hotel room 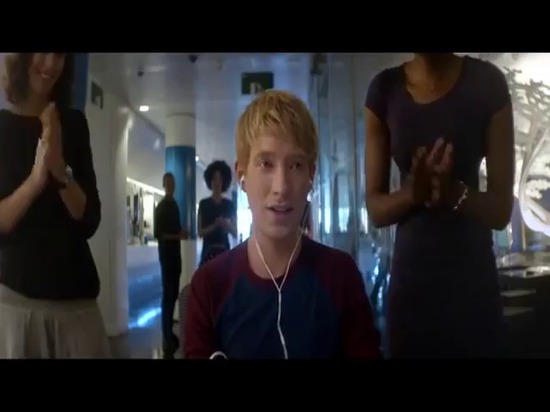