with 274 identical, ornamental concrete modules, the current façade doesn’t reflect the name of the building, which references the nearby jardin botanique. the concept proposes to cover the existing building with planter beds and a web of cables to form a vegetated green envelope. at the top of the building, a ‘chrysalis’ observation pod made of wood and steel offers views across the city.vincent callebaut’s landmark design is positioned on a prominent plot, using photosynthesis to absorb carbon particles from the urban smog, while integrating advanced renewable energies that address the project’s own needs. meanwhile, at ground level, a contemporary façade and structural glass canopy enhances the relationship between indoor and outdoor space.

as a means to bring biodiversity back into the heart of the city, the design uses carefully selected plants to color the building according to different seasons. 274 planter beds are directly integrated into the existing modules of the façades, enabling the growth of overhanging and climbing plants along the web of cables woven into the existing vertical seals. maintenance is performed twice a year, at the beginning of spring and the end of autumn.

the photosynthesis of 10,000 plants — covering the elevations and green roofs — enables close to 50 tons of carbon dioxide to be removed from the atmosphere each year. the façades also increase the building’s thermal inertia, while the woodwork and window panes are replaced by curved double glazing with high performance, airtight tilt, and turn frames.

the rooftop structure is subdivided into 15 arches made from glued laminated timber, pretensioned by a web of steel cables. from a functional perspective, the ‘chrysalis’ is linked to existing vertical circulation routes. the flexible space could accommodate a variety of events, training or even co-working. the roof of the redesigned building also includes both photovoltaic panels and wind turbines, which are estimated to generate 32,340 kWh/year. 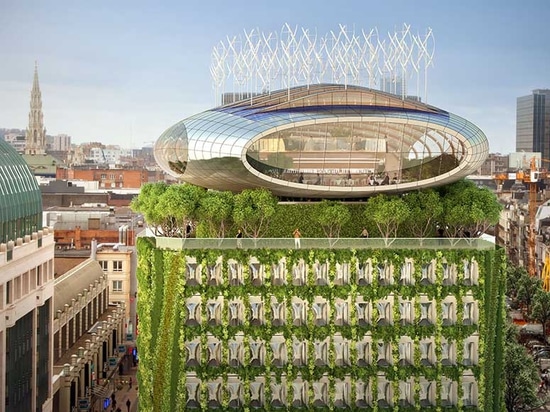 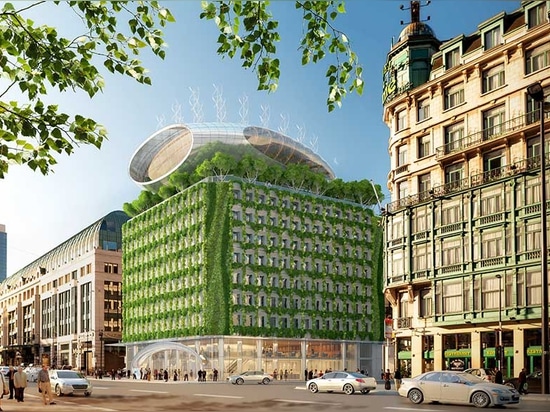 the existing building was originally constructed in 1977 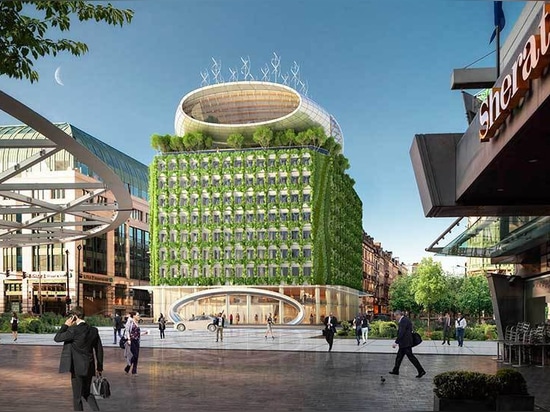