As part of our Frei Otto special issue, Sophie Lovell interviewed some of the key professors at Stuttgart University, not least of whom was Otto’s successor there, Werner Sobek. Both engineer and architect, Sobek is head of the Institute for Lightweight Structures and Conceptual Design and one of the world’s leading investigators into lightweight structures and beyond. Here he shares both his memories of working with Otto and why lightweight today has more to do with energy than materials.

Perhaps you can start by telling me about your own studies at Stuttgart between 1974 and 1987, and your influences there, particularly that of Frei Otto?

When I started studying in Stuttgart I was very lucky to have four outstanding teachers. The first was Jürgen Joedicke, a professor for theory and architecture. Then came Frei Otto. The third major influence was Jörg Schlaich, successor to Fritz Leonhardt. The fourth professor I would like to name was Klaus Linkwitz, Professor for Geodesy. I first met Otto in the second semester, and I quickly became a voluntary assistant tutor. I was at his Institute for Lightweight Structures (IL) between 1976 and 1980, which gave me a deep insight into what IL was doing – and a first taste of its interdisciplinary approach.

What was different about Stuttgart University in your view to other schools?

We were very lucky that in Stuttgart in the early 1960s there were a few professors in the Departments of Architecture and Engineering who looked for a closer cooperation. From this time on there was what we now call the “Second Stuttgart School”, which blossomed between 1960 and 1980. It was based on the interaction between just a few people, but the results were great. The influences emanating from this school were very important: it bridged the gap between architecture and engineering – both of which I took the opportunity to study – and widened the view into aircraft design, car body design, textiles and other disciplines.In 1994 you became a professor at Stuttgart and successor to Otto as head of the Institute for Lightweight Structures (IL). In 2001 you took on Jörg Schlaich’s chair as well and merged their departments into one: The Institute for Lightweight Structures and Conceptual Design (ILEK). It was an ambitious and bold move. What effect did this have on the research there?

We were able to focus more on engineering work but were still dealing with the same topic: super lightweight structures. It was a huge load for me, not only on the scientific level. But it was a very important symbolic act, indicating that we wanted to overcome the gap between the disciplines of engineering and architecture – between analysis and synthesis.

Since then, as a strictly interdisciplinary team composed of architects, engineers, aircraft engineers, structural engineers, ceramic engineers, biologists and others, we have focused not only on making buildings lighter and lighter, but also on energy-related issues, urban planning and so on. We’ve dramatically widened the scope and invested from different standpoints. I think we do it quite successfully. The institute is now much bigger than it ever was before. With a crew of 35 people we are really able to do something.

I’m interested in the evolution of lightweight structures since then. How was that changed? When you say you merged lightweight with concrete, that sounds at first like merging the heavy with the light…

At first it may sound like a contradiction, but nowadays we categorise lightweight into three areas; one of these is material lightness. Today, for example, we have ultra-high-performance concrete, which is in the same strength field, in terms of material lightness, as mid-quality steel.

The second category is structural lightness, which means how you do the inventing, sketching and form-finding to achieve structures of minimum weight, or get close close to minimum weight, using models. This was first researched by Antonio Gaudí, by Heinz Isler, and of course also by Otto. We call this the experimental part. The mathematical-numerical method of form-finding was essentially driven by the work of John Argyris and Klaus Linkwitz. Both researched and taught in Stuttgart. Today, we typically combine both methods.

The third is the energetic part. Nobody talked about energy back then, and if they did, it was about energy consumption during the lifetime of the buildings. They did not talk about the embodied energy, the grey energy, which means the energy you need for the production and transport of the materials involved. For example, in a new residential building this embodied energy is between 25 and 35 times the annual energy consumption for heating, cooling, cooking, and so on.What areas of research is the institute focusing on at the moment?

We are looking at things like adding what we call “artificial muscles” to buildings that are able to react to loads and to other environmental conditions in general. This means we are making buildings active and adaptive by embedding sensors, activators and control units. We are also working on the further development of textile structures, looking at replacing standard façade systems with multilayered textile facade systems: the advantages being that they will be lighter and easier to install, and able to harvest and store energy.

Another focus of our research is in the field of super-light structural elements made of concrete: foaming part of the interior adds cavities and allows a significant reduction of dead weight. This means that if we take a concrete beam, we can implement cavities wherever there is less loading – and where there is high loading, we have solid concrete. As a result, we are able to reduce the dead weight of a concrete element by up to 70 percent, but still keep its original load-bearing capacity. You find the equivalent of this in nature, especially in bone structures. We’ll probably start investigating this process next year with other materials as well.

Let’s go back to Otto. Somebody said to me that he wasn't really an architect but a thinker, an ideas man.

Yes, he was not an architect, but a thinker. The number of buildings where he could be named as the architect is very limited. He was the only lifelong professor at the entire university who did not have to teach – he was there to do research. He was in a fantastic position because he was totally free from the hard life of daily teaching, exams, meetings and so on.

This was during the golden era when there was plenty of money around and it was not really a problem to get five hundred thousand Deutschmarks for research. The universities were much more liberal and free in those days as well. There was not this permanent evaluation of everyone and everything. During the 1960s and 70s “future” meant something positive. Pneumatic structures were possible. The Concorde supersonic aircraft was produced. Man landed on the moon. Everything about the future was positive. It was only two decades, but it was a really fruitful period for Otto.

Would you agree that he was radical in his ideas?

He definitely was. He often surprised everyone, like when he turned up with some biologists from Berlin and compared mussel shells with concrete shells, or linked human bone structure with steel columns. This permanent jumping over fences, or not even accepting fences between disciplines, was something very important at the time. Otto did not just jump fences, he tore them down.We touched on the meaning of lightweight, how it’s changed over time and how it’s become an energy issue. If one says the goal of engineering and architecture used to be the lightweight, what would you say the goal is today?

The goal of Otto’s thinking was lightweight because it enabled us to build high and bridge long spans. That was the thing then: to cover a stadium without internal columns, to do it light, to have it somehow transparent and all these things that were never there before. Then we had postmodernism and deconstructivism and blobby shapes and all that nonsense, which went nowhere. Otto’s work was not thought about at all during those fashions, which was frustrating.

In that period the lightweight thing was just used for nicely designed pedestrian bridges and grid shells and things like that. It was not an essential element to be considered every time you start designing a building. But now we have come to realise that our society is running out of certain materials. Over the next 16 years we will have to build homes, workplaces and infrastructure for two billion more people, which means that we have to build the entire built world as it was in 1930 all over again, but in just 16 years. We simply can’t do that. It’s absolutely impossible. We don't have enough architects, enough construction equipment, enough engineers, and we don't have the materials – at least if we continue to build as we have done so far.

If we focus on the materials alone, reducing the consumption of resources means we need lightness as well as recyclability. This is a topic I've been teaching since 1992, when there was nobody out there talking about recyclability. It puts us at ILEK in the pole position of worldwide research because we have been doing it for 20 years. This is why Harvard and MIT and Chicago and Moscow and Singapore and all these universities are now knocking at our doors, asking to cooperate. 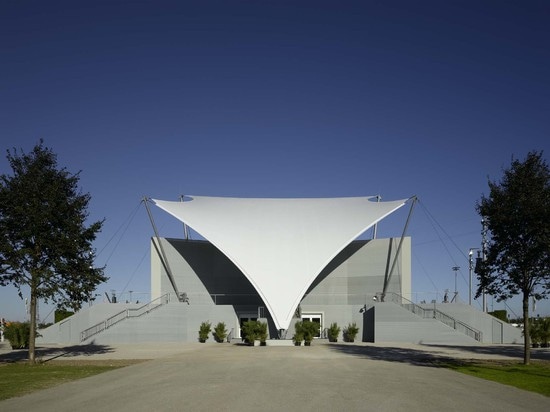 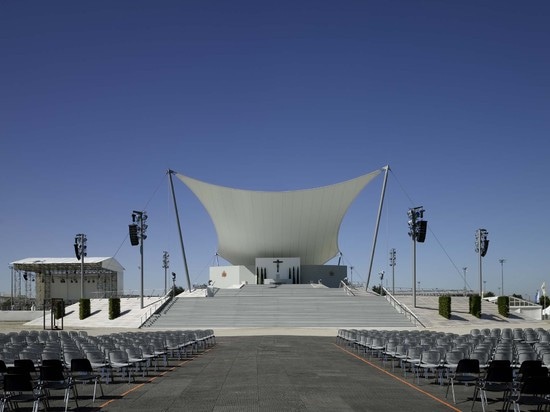 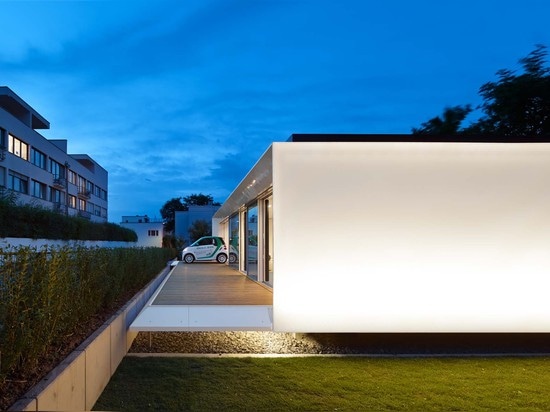 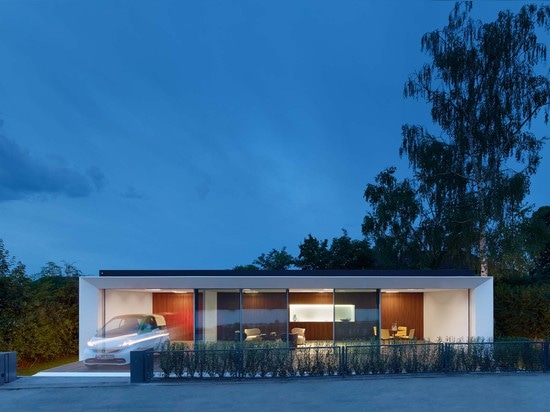 Thanks to Sobek’s energy concept and self-learning building control system, B10 generates twice as much energy as it requires – and from sustainable sources. (Photo: Zooey Braun, courtesy Werner Sobek) 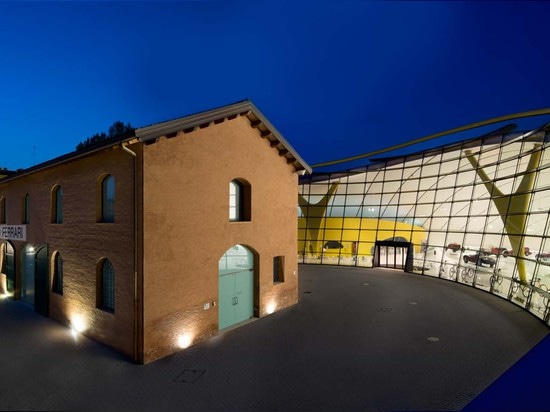 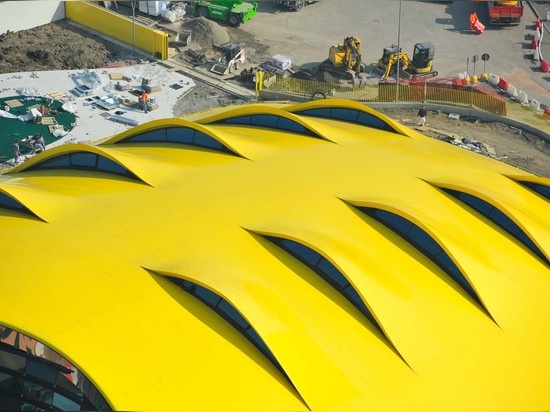