Geometry of Light: A Multimedia Installation Connects the Iconic Architecture of Farnsworth House with its Pastoral Setting

Plano, Illinois, is a long way from the European birthplace of architectural Modernism, both geographically and culturally, and yet it’s right here, amid an idyllic pastoral setting, where one of the most iconic modernist houses can be found: Mies van der Rohe’s Farnsworth House

Hovering above the forest floor, the pioneering steel-and-glass house, which has been accessible to the public since 2004, is the apotheosis of Modernism’s less-is-more creed but it’s also a building inextricably tied to its surroundings. This complementary relationship between building and site was uncannily explored in “Geometry of Light”, a three-night, light and sound installation which took place in October. Immersive in experience and expansive in scope, the intervention was conceived by Chicago-based art duo Luftwerk, in collaboration with architect and director of MAS Studio Iker Gil, in an effort to illuminate - so to speak - the forgotten history of the site and bring to the surface the underlying geometries that connect the iconic house to the topography of the river floodplain where it stands.

Completed in 1951 as a weekend retreat for prominent Chicago physician Dr. Edith Farnsworth, Farnsworth House is both the culmination of Mies van der Rohe’s architectural practice and the distillation of the modernist ideals of the International Style. The building’s radical transparency, uncluttered interior and minimalist structure, whereby “every physical element has been distilled to its irreducible essence”, in historian Maritz Vandenburg’s words, constitutes “a puritanical vision of simplified, transcendental existence”. It's thus no wonder that the house’s emblematic universality tends to obscure its explicit site-specificity.

Not only does the natural landscape inform Mies’ design, it also functions as an extension of the building’s figurative space. Raised one and a half metres above the ground, the building’s elongated rectangular floorplate lies parallel to the course of the Fox River in the south, with the suspended stairways that ceremoniously leading up to the house directly facing the river. Although the simplicity of its geometric volume stands in stark juxtaposition with the pastoral setting, the house nevertheless subtly reflects its surroundings – the thin, white I-beams echoing the darker tree trunks that starkly populate the site while the planar floor and ceiling mirror the floodplain stretching underneath.

The sensory installation at Farnsworth House, which took place on October 11-13, 2019, during the Chicago Architecture Biennial, expanded upon the architectural features of the iconic house, highlighting its structural elements and their relationship with the natural landscape through a Cartesian symphony of vertical and horizontal red lasers. Reflecting Luftwerk artists Petra Bachmaier and Sean Gallero’s interest in the perception of light and colour, the three-day intervention was in effect the second iteration of “Geometry of Light”, the first one premiering last February at another one of Mies van der Rohe’s iconic buildings and Moderist icon, namely the German Pavilion in Barcelona, which was designed with Lilly Reich in 1929.

The array of laser beams conjured up a virtual, three-dimensional blueprint of the Farnsworth House whose individual components were sequentially showcased by turning the lasers on in different combinations throughout the evening. But more than just an architectural x-ray, the installation also drew attention to the site’s history, pinpointing trees that no longer exist as well as marking the levels of the numerous floods that have reached the house – an ironic occurrence considering the house was built to resist floods, a sign perhaps that taming nature is a fool’s errand.

The mesmerizing light show was accompanied by a custom-designed sound piece by Spanish sound designer Oriol Tarragó who used the pitch of the space to create a tonal reading in direct response to the site. Combined with the eerie light show, Geometry of Light immersed visitors in a heightened reality delineating “the visible and invisible conditions that shape the close relationship between this historic house and the surrounding trees and Fox River” as the team explains. 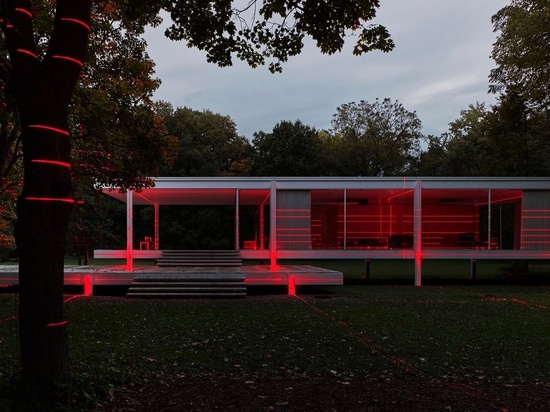 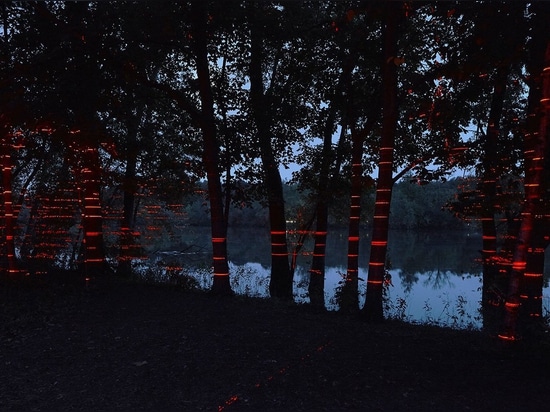 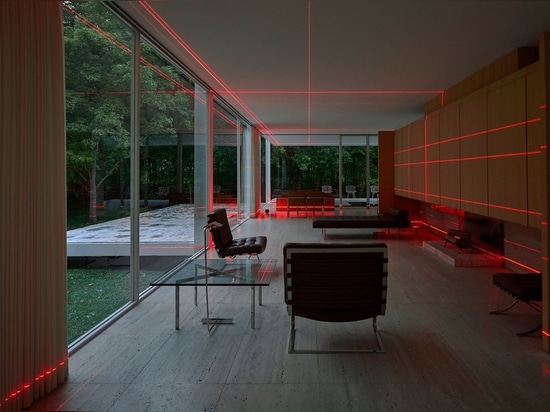 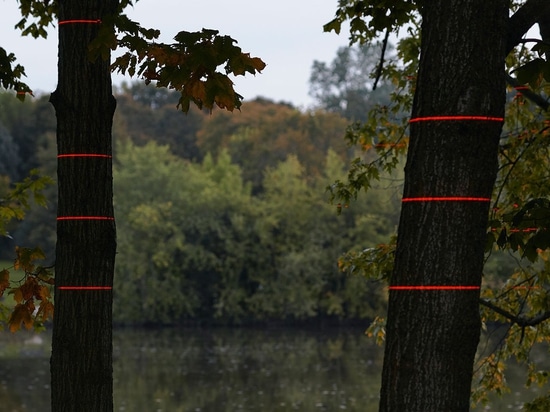 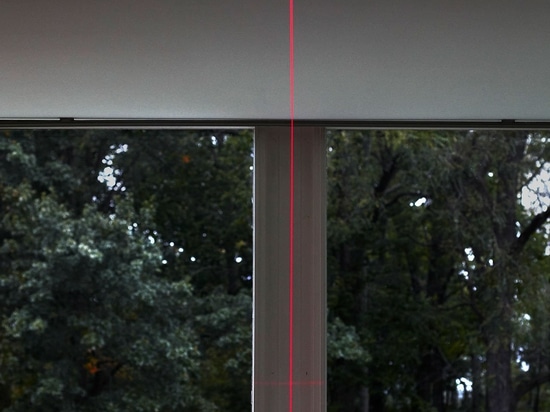