The film follows him as he comes to terms with modern life; postwar France’s infatuation with mechanical efficiency and mass consumption. In true Tati fashion, set design, lighting, sound, and visual effect played a vital role in this movie, more so than actual dialogue. Some might argue that Tati’s true skill was in architecture and design. At the center of Monsieur Hulot’s noble and comedic struggle is the Villa Arpel, a domestic mise-en-scene, and protagonist that emulates if not exaggerates these period-sensitive conditions.

Set behind a garden of geometrically-puzzled grass patches and colored stone walkways, a boxy home takes on a life of its own. Its frontal, circular windows become watchful eyes while a whole host of dysfunctional gadgets and appliances puts Monsieur Hulot through a series of running gags. This particular home, set in a fictitious suburban development outside of Paris, is indicative of a society or new generation that favors style over substance.

Paying homage to this absurdist and satirical masterpiece, New York gallery Les Atelier Courbet teamed up with architecture practice Thirwall Design to conceive the Please Be Seated installation during last week’s Design Miami. Coinciding with the release of Taschen‘s comprehensive monograph Jacques Tati: The Complete Work, the fair booth showcase was mounted for the US launch of three limited-edition furniture designs, the French studio Domeau & Pérès extracted from the film and reproduced. 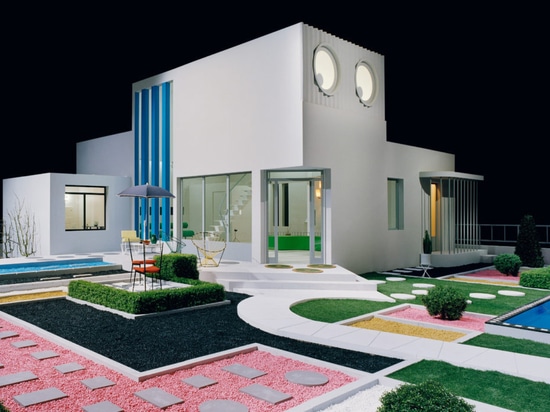