Made of powder-coated aluminum, the interlocking metal fins direct light and shadow throughout the day for an animated visual effect.

Getting the angles of the canopy just right proved particularly challenging. SOFTlab used a Grasshopper plugin called Galapagos, which runs evolutionary algorithms to optimize the rotation of each pillar’s trunk, reducing the number of acute angles and very small segments. Optimizing the overhead lattice structure was not just a visual concern, either—the interlacing canopy provides the stiffness that holds the entire structure together.

SOFTlab automated the design of the nearly 1,000 custom stainless steel brackets that hold the complex canopy together, which would have been nearly impossible to do accurately by hand, not to mention extremely time-consuming, according to founder Michael Szivos. While this is a process the firm has used on many projects, this was the first time that SOFTlab used it to develop parts that would wind up three dimensional after being folded from 2D shapes. Finding the precise shape of the brackets was a difficult procedure, according to Szivos. “The main issue with the bending of the steel brackets was calculating an acceptable tolerance,” he explained. “This was complicated by the interwoven canopy. Because all of the pieces in the canopy connected in an unordered way we couldn’t add much tolerance to the bolt holes. If we added tolerance the pieces would eventually not line up because of the overall lack of precision in the connections.”

This required some complex mathematics, and while their typical approach would be to model the angles and even everything out across them, the fact that there were so many brackets meant that rather than adding negligible elongation, it could’ve offset lengths by more than an inch. Using automation helped generate the unique brackets that hold the structure together.

Even the non-structural elements took advantage of computation. To create the desired gradient effect while staying within budget constraints, SOFTlab created a custom program that created pairs of colors selected from a standard Drylac catalog, meaning that the illusion of using 100 custom colors could be realized with just 28 off-the-shelf shades.

SOFTlab is known for its high-tech approach, especially in regards to its other colorful installations like a glowing waterside ring in Virginia, and a kaleidoscopic pavilion in New York. Computational design has served other firms working to make elaborate metal installations look effortless, as well—earlier this year MARC FORNES / THEVERYMANY unveiled a sweeping aluminum pavilion created with the help of digital modeling in Texas. 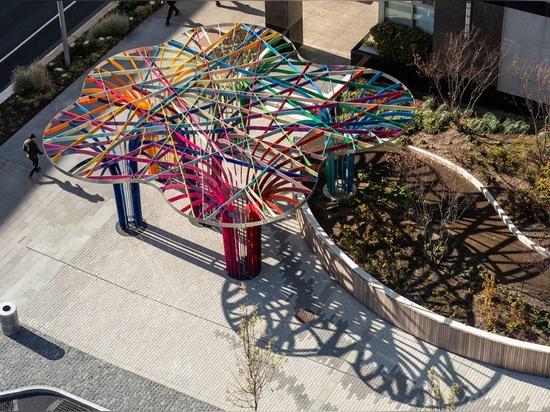 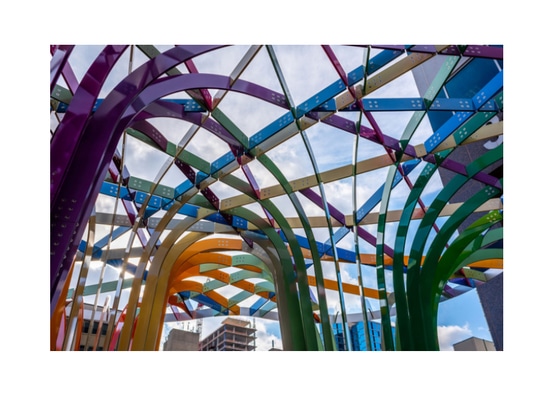 To get the effect of a complex gradient on a limited budget, SOFTlab developed an automated system for creating the visual effect they wanted with just 28 off-the-shelf colors.