With finishing touches complete, the stream-straddling design makes its debut in L.A.

After four years of careful collaboration, the boundary-pushing Bridge House gets its big reveal in Hancock Park. An ultra-unique site with a stream running through it was the impetus for Bridge House’s unlikely conception – the innovative design extends more than 200 horizontal feet across the site, passing over the stream in the process. After breaking ground and barreling through transformative construction milestones, together with MODAA Construction, Dan Brunn Architecture and Dwell are thrilled to reveal Bridge House’s final form.

Traversing the stream directly rather than confining the design to one side, the home’s siting laid the framework for an immersive experience with nature – a central objective of the project. "The idea with the design was to un-design in a way," says principal Dan Brunn. "To find nature and be one with nature."

Treating the home as a portal through which to experience nature, windows and doors from Western Window Systems played a vital role in establishing the intimate relationship with the environment. The first of its kind, a completely custom Series 980 Double Pivot Door impressively spans a 20 foot horizontal opening, dramatically welcoming guests into the home. Deeper inside the home, interplay between light, shadow, and reflection creates quiet moments of ethereal beauty. "The bridge," says Brunn, "is where the magic happens." Bridging over the stream, the central corridor incorporates Series 600 Multi-Slide Doors opposite from custom-developed fin windows that have become a Dan Brunn signature – the marriage of the two yielding visually dazzling results. "We expected the light patterns to emanate from the fin windows," says Brunn. "We didn’t expect the reflection," he says, marveling at the serendipitous way the sliding doors bounce back light.

At the home’s façade, the dialogue with nature is strengthened by the materiality of the exterior cladding. Supplied by Real Cedar, the knotty grade wood was elevated to a more modern aesthetic by the custom stain, and joint-free vertical application. The final result is captivatingly ambiguous. "People actually can’t tell what it is," says Brunn. "Sometimes they think it’s a monolithic material. They get surprised when they walk closer, then touch it." The color and tone of the cedar changes in response to light and viewing conditions. "It is a reflection of its environment," explains Brunn. Over time, the color will trend towards grey as the cedar naturally weathers, further blurring the distinction between the home and its surroundings.

A communal, semi-private outdoor gathering space, anchored by a Paloform Caldera Cor-Ten fire pit, provides a cozy hub for conversation. The outdoor feature was chosen because of its natural reactivity with the elements, developing a beautiful and maintenance-free patina over time. The idea, says Brunn, is to "let it go, let it rust," embracing the organic change and natural beauty. The fire pit also intentionally ties into the corrugated Cor-Ten fence, bringing visual cohesion to the outdoor spaces.

By carefully considering materiality and relationship to the site, the final form is effortlessly intertwined with nature. Thought was given not only to how the home is presented now, but how it will react and evolve symbiotically with nature over time. "Just as the landscape will change," says Brunn, "the house will behave the same way." 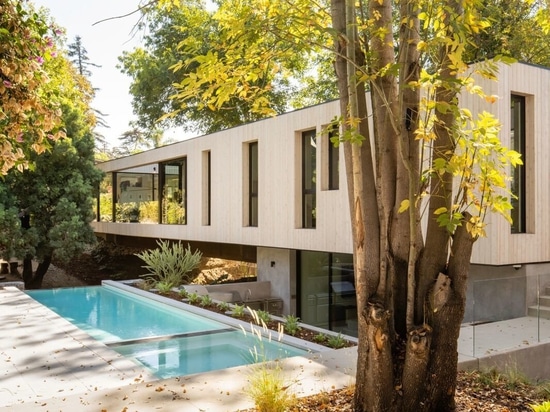 Taking advantage of the temperate California climate, Bridge House embraces indoor-outdoor living to the fullest. Several outdoor living and entertaining zones have been incorporated, while the large glass sliders at the interior courtyard completely disappear to invite nature in. 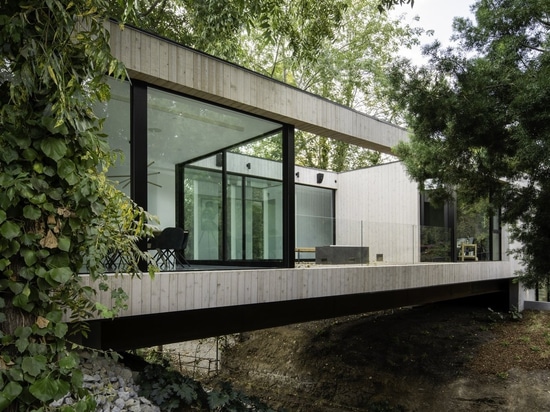 Spanning an impressive 210 feet, Bridge House crosses directly over a brook running through the property, marrying the landscape with minimal disturbance. 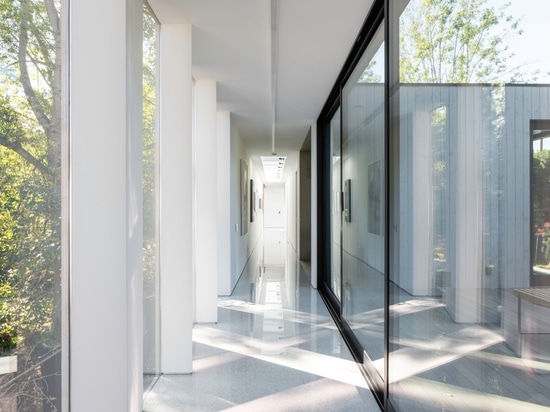 Doors and windows at the home’s bridge filter and reflect light, with the overlapping patterns creating a dazzling display of ethereal beauty. 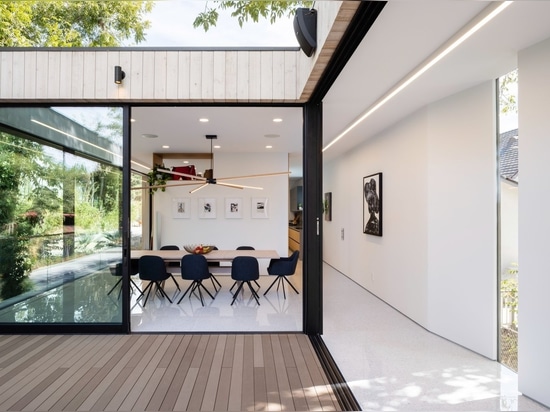 The courtyard, a dramatic indoor-outdoor experience, becomes an extension of the home’s public space. Visual and functional connection to the dining room is enabled by Series 600 Multi-Slide Doors from Western Window Systems. 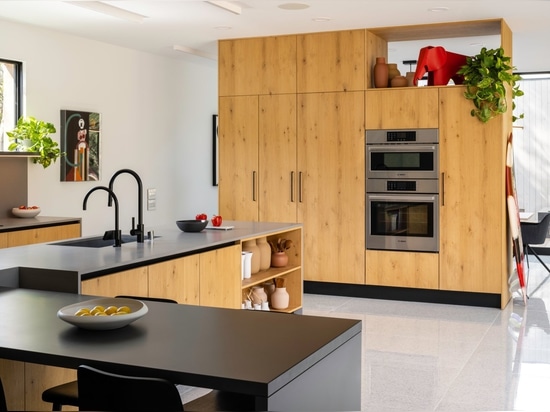 The warm and inviting kitchen occupies the space between the living and dining rooms, maintaining an open and fluid connection to both.