Fashion designer Raf Simons has announced that he is becoming co-creative director of Italian label Prada, where he will work alongside Miuccia Prada.

The collaboration between Belgium-born Simons and Miuccia Prada – who has sat at the helm of Prada since 1978 – is said to come from "a deep reciprocal respect" between the two designers.

"It opens a new dialogue, between designers widely acknowledged as two of the most important and influential of today," said the brand in a statement.

"Conceptually, it is also a new approach to the very definition of creative direction for a fashion brand - a strong challenge to the idea of singularity of creative authorship."

This isn't the first time that Simons has worked at a high-end fashion house. Since launching his self-titled menswear label in 1995, the designer served as creative director for Jil Sander between 2005-2012, before moving on to Christian Dior where he stayed until 2015.

The following year he moved to Calvin Klein, where he steered the brand's creative output until 2018.

In between the designer has also partnered with mainstream brands like Adidas, creating trainers inspired by vintage space suits, and luggage company Eastpak, for which he has produced a line of bags that nod to the aesthetics of sci-fi film Blade Runner.

Simons to bring "a different point of view"

Prada was founded in 1913 by the grandfather of Miuccia Prada, who has personally overseen the business for over four decades. The introduction of Simons is hoped to provide a fresh burst of innovation – a quality that the brand perceives as an "inherent facet" of its identity.

"As times change, so should creativity – the synergy of this partnership is far-reaching," Prada continued in its statement.

"It is a reaction to the era in which we live – an epoch with fresh possibilities, permitting a different point of view and approach to established methodologies."

Simons' move to Prada isn't the only change that the brand is set to undergo – last year, in a bid to be more eco-conscious, it announced plans to completely phase out the use of virgin nylon in the production of some of its bag models.

Prada has also recently procured a loan for £42.9 million from banking group Crédit Agricole, with repayment terms determined by whether the brand meets sustainability targets. 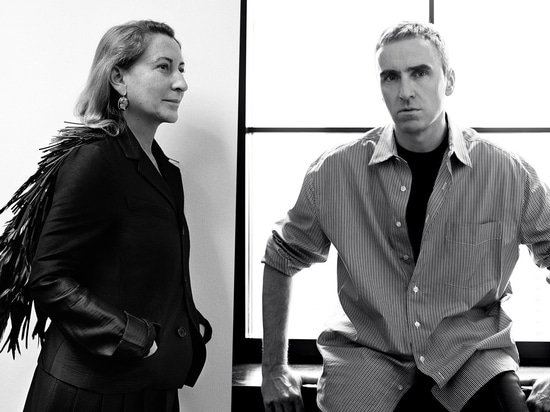