There’s only one four-bedroom apartment at the former BBC Television centre building in West London, and that’s not its only unique feature. In fact, everything about this duplex apartment is unique. From the black steel statement staircase to the pivoting doors to the master bedroom, the architecture has been designed bespoke by Allford Hall Monaghan Morris (AHMM) – the firm behind the renovation and conversion of the whole development.

The apartment is one of the ‘Architects’ series’ of penthouses that sweep the upper floors of the Grade II-listed circular 1960s Helios building, distributed by developer Stanhope to a curated selection of architects and designers to show the versatility of modern architecture. Last year, Piercy&Company, Retrouvius and Bella Freud launched a homage to the 1970s, while Haptic Architects and Laura Fulmine created a serene living gallery of artworks.

It’s a challenge for developers to attract high-net-worth individuals to the new-build life – and to the west London postcode of W12, where just five years ago the highest selling home was a mere two million. The AHMM x Waldo Works apartment is priced at 7.6 million.

‘When you’re making millions, you don’t really need to live in a box identical to your 200 neighbours, and this series reflects Stanhope’s desire to create modern homes for living, not investment crash pads’, explains Peter Allen, Residential Sales and Marketing Director at Stanhope. And with its curved plan, sculptural black tiled fireplace and luminous Douglas fir flooring throughout, this apartment couldn’t be further from a box.

Seeking to counterbalance striking modernity with warmth and eclecticism, Allen called on Tom Bartlett of Waldo Works, a designed known for his distinctly British, vibrant style. While Bartlett works on plenty of luxury residential projects with the likes of Cara Delevigne, Jade Jagger, Smythson and Selfridges, working for a yet-to-be owner on such a strong architectural canvas was a new challenge for him that was both ‘freeing and confusing’.

Instead of the identity of a person or brand, he focused on the modernist history of the building and the animated spirit of the BBC production offices. He designed a ketchup-red lacquered table for the entrance – a colour taken from a Festival of Britain palette inspired by the optimism of post-war Britain. Climbing the wall to the second level is a geometric wall sculpture by Deepa Panchamia, chosen by Bartlett to evoke the flowing geometry of broadcast waves.

A certain softness was needed to balance the 3m floor to ceiling windows and phenomenal views across London. For the master bedroom Bartlett chose a celadon colour scheme and designed a four-poster inspired head board with Douglas Fir and hessian grass cloth to create a sense of sanctuary. In the living space, lightweight Scottish wool curtains, laser-cut with rectangular shapes, blur the boundary between inside and out, and an Anni Albers-designed rug by Christopher Farr balances the weight of the fireplace.

Through colours and objects, Bartlett achieves his quest for ‘happy modernism’ at what could have been a very purist apartment. For him, it’s a unique combination of domesticity and modernism. Cosy is not a word he usually likes to use, but he ‘wanted it to be domestic without being “doilie-ed” – the flying ducks without the flying ducks.’

As we complete our tour, Bartlett describes a former client, Peggy, a 75-year-old Notting Hill resident and a Detroit heiress, who lived amongst a weighty art collection between piles of books and objects. One day, she decided to go new-build. She sold much of her collection, down-sized and started collecting Edmund de Waal for her contemporary new apartment. We’re certain that Peggy would feel right at home here. 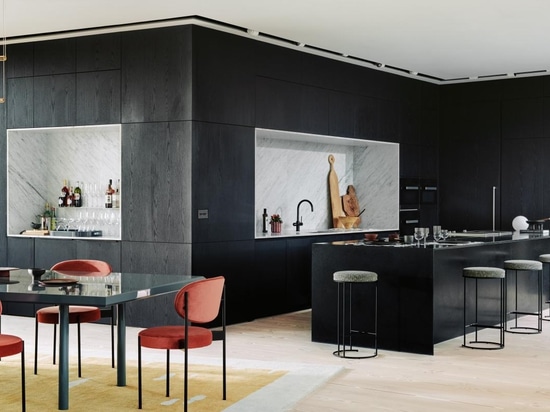 The largest penthouse at the Television Centre residential development has been designed by AHMM with interior design by Waldo Works. 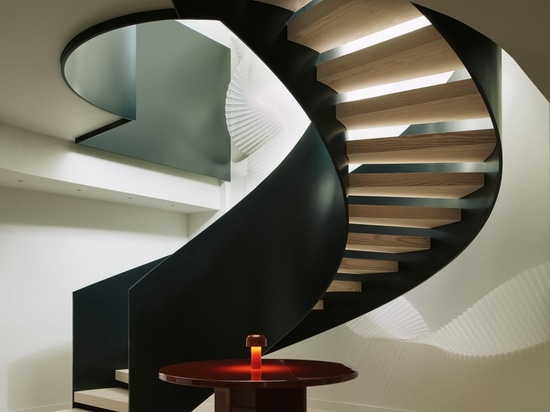 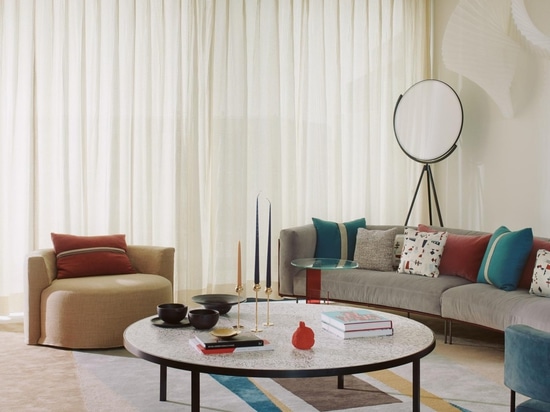 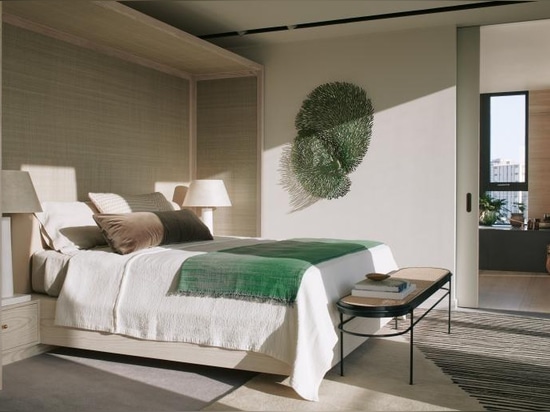 The master bedroom features bespoke designed joinery headboard and platform bed made by Constructive and Co. by Waldo Works, brass handles by Superfront, Frank beside lamps by Collier Webb with custom rice paper shades, Banca Iaia bench in black by Gustavo Bittencourt, and a custom designed rug by Waldo Works, made by Christopher Farr 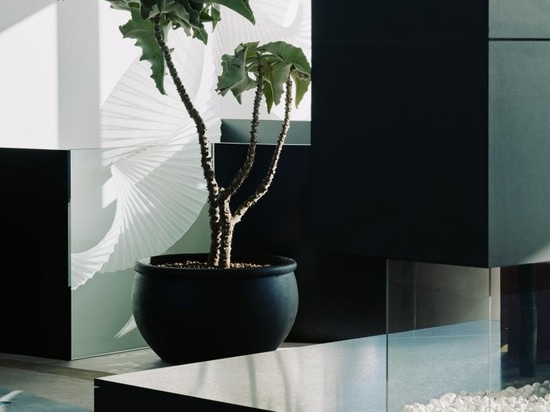 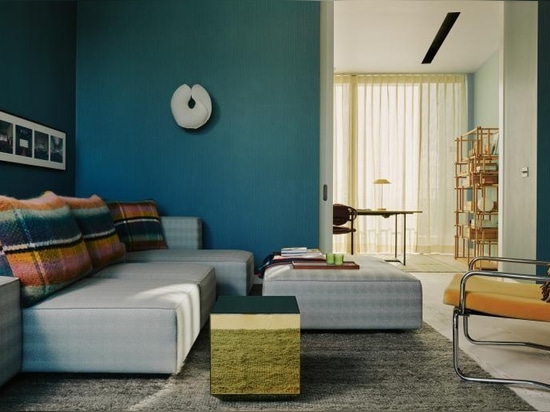