Located in Lisbon’s Largo do Carmo, a tree-lined, historical square whose picturesque charm belies the city’s tumultuous past, this recently renovated apartment occupies the entire floor of an 18th century Pombaline building whose stately grandeur has been revamped with contemporary sophistication and minimalist flair by Aurora Arquitectos.

A popular spot for Lisboetas and tourists alike, and the epicentre of the 1974 Carnation Revolution that ended nearly 50 years of dictatorship, Largo do Carmo is a marvel of 18th century architecture, having been completely reconstructed after the earthquake that levelled the Portuguese capital in 1755, with the exception of the Convento do Carmo whose ruins still stand on the east side as a reminder of that great tragedy. Named after the Marquês de Pombal who was instrumental in rebuilding the city, the Pombaline buildings surrounding the square and the city at large reject ostentatious decorations for a more austere elegance. Comprising a compact palace on the lower floors and luxury apartments on the upper floors, they embodied the city’s renewed optimism, not to mention early anti-seismic design.

Extending across the entire floor, the Largo do Carmo apartment’s original configuration has been broadly retained. An entrance hallway functions as a circulation node with two corridors leading to the four bedrooms and living area, the latter unfolding as a sequence of rooms. Out of respect for the building’s heritage, all alterations have been subtly marked: walls that were demolished are traced by slim ceiling beams that incorporate lighting while unused doorways that have been plastered over retain their initial outline. Such gestures add a playful dimension to the otherwise classical aesthetic and minimalist décor while also documenting the architectural interventions so that the apartment can one day return to its original state.

The apartment stands out for the ornate cornices, plaster moldings and ceiling roses that have been meticulously restored transforming the ceilings into works of art. By applying a subdued décor of contemporary minimalism, underpinned by an all-white colour palette and natural wood finishes, the architects have purposely refrained from outshining the apartment’s plaster flourishes, thus highlighting their detailed craftsmanship and sumptuous elegance. That doesn’t mean that their design lacks craftsmanship or elegance; on the contrary, the apartment is a marvel of exquisite detailing and modern finesse. From minimalist bronze detailing found throughout in baseboards, built-in furniture moldings and ceiling beams-cum-light fittings, to the gorgeous black marble surfaces in the kitchen that stand out amid the washed out palette, to the undulating cladding of the kitchen island and the vintage ceramic tiles in the powder room, the apartment is teeming with subtle touches of luxuriance and sophistication that initiate a creative dialogue with the building’s heritage. 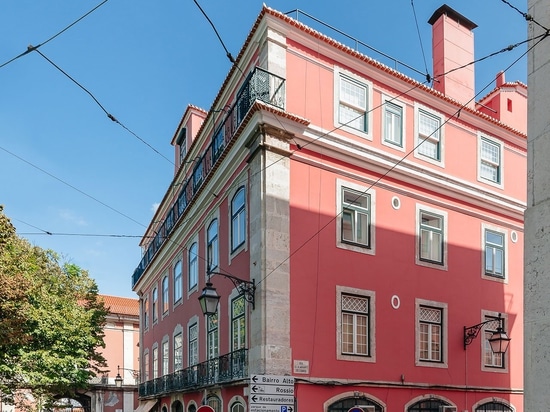 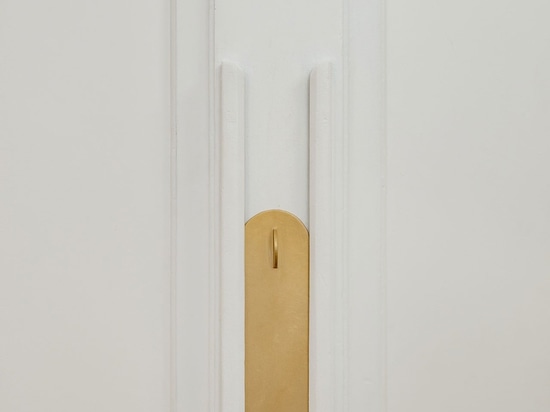 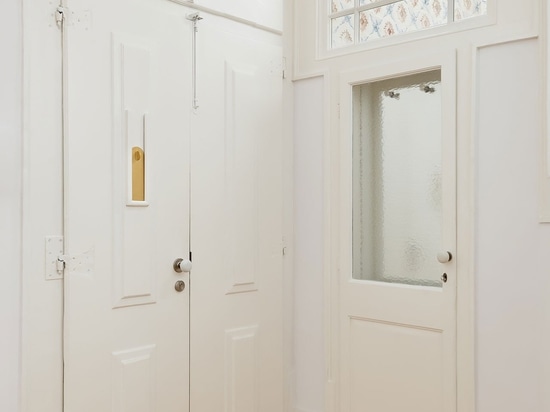 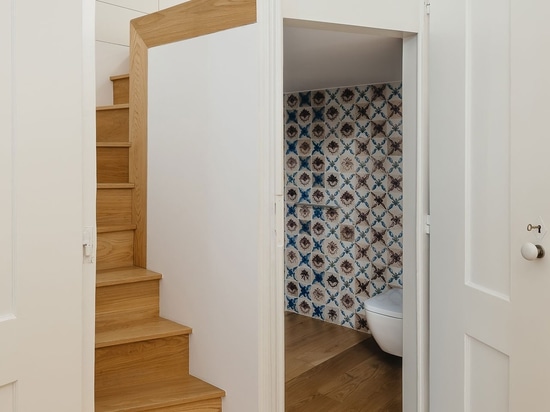 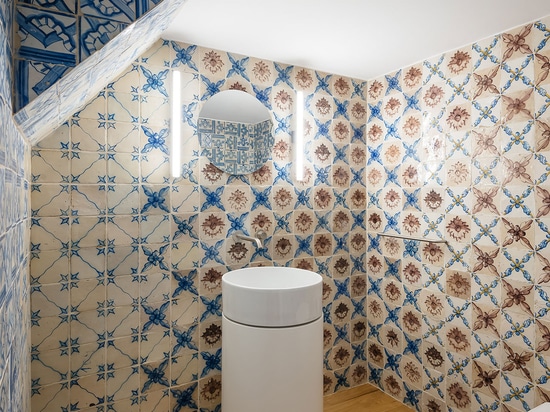