ICON, a robotics and advanced materials startup based in Austin, Texas, made headlines on the grounds of the 2018 South by Southwest Festival when it presented a prototype for a 3D-printed home created under 24 hours at a cost of $10,000.

Two years later, the company applied its tools to the city’s affordable housing crisis when it recently unveiled a small neighborhood of six 3D printed homes that will soon be ready for occupancy.

The 400-square-foot dwellings, the first full 3D-printed homes in the country, are now a part of Community First Village, a 51-acre master-planned community in northeastern Austin providing affordable, permanent housing and social services for the city’s former homeless community. The structures, designed by local firm Logan Architecture with finishings by Franklin Alan, all feature a single bedroom, bathroom, full kitchen, living room, and porch. “The promise of ICON’s 3D-printing technology is really exciting,” Alan Graham, the founder of the nonprofit Mobile Loaves & Fishes which opened the village in 2016, said in a press statement, “and what better place to start putting it to use than in one of the country’s most innovative neighborhoods designed to serve men and women who have experienced the trauma of homelessness? Vulnerable populations like the homeless are never among the first to access leading-edge anything, but now here in Austin, they’re among the first in line who will be living in some of the most unique homes ever built—and we think that’s a beautiful thing.”

To produce the homes, ICON used their 2-ton, 11-foot-tall Vultan II printer, which extrudes a proprietary concrete mixture the team refers to as “Lavacrete.” ICON cofounder and CEO Jason Ballard believes the technology can be easily applied to the country’s affordable housing crisis in light of the relatively short construction time it affords, as well as the often small environmental footprint and design flexibility. Thanks to the ability to print the walls of three homes at a time, the Community First Village project is nearly complete and will open to its first occupants this spring.

More tiny home communities will likely pop up across the country in the near future given the recent passing of the YIMBY Act, a bill written to streamline affordable housing production and zoning for high-density single-family and multifamily housing, by the House of Representatives. A similar community of 40 units traditionally-built shelters was recently completed in San Jose, California, on a formerly vacant property owned by the Valley Transit Authority. 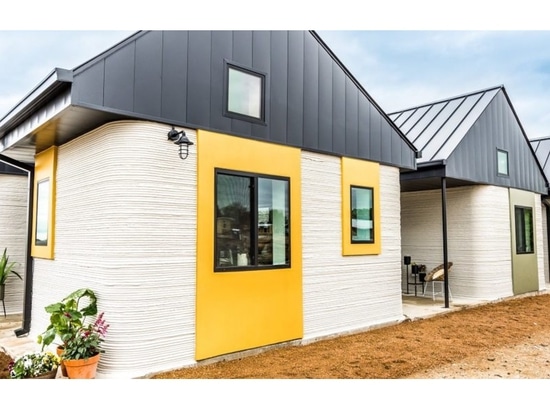 The homes will be ready for occupancy this spring, making them the first used 3D-printed residences in the country. 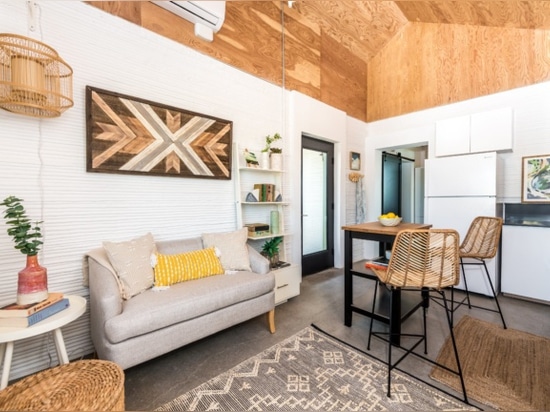 The top half is fabricated separately from the 3D-printed walls.