Satish Gujral -The Leonardo Da Vinci Of India, Passed Away At 94: A Tribute

Satish Gujral - a noted Indian artist-turned-architect, painter, sculptor, muralist, graphic designer and author passed away on 26 March 2020 at the age of 94. Born on 25 December 1925 in Jhelum (now in Pakistan), Gujral was the most versatile artist in India and was awarded Padma Vibhushan, the second-highest civilian award of the Republic of India, in 1999.

Incidentally, he was the younger brother of Inder Kumar Gujral who remained Prime Minister of India from 1997 -1998. A freak accident at an early age resulted in Gujral's impairment of hearing, which he regained 62 years later after a surgery in 1998.

With the demise of Satish Gujral, India lost a towering and multifaceted personality which created a huge void in many spheres of art. Condoling his death, The Prime Minister of India, Narendra Modi wrote, "Satish Gujral ji was versatile and multifaceted. He was admired for his creativity as well as determination with which he overcame adversity. His intellectual thirst took him far and wide yet he remained attached with his roots. Saddened by his demise."

The Vice-President of India, Shri M. Venkaiah Naidu said, "Saddened to learn about the demise of an eminent painter, artist, sculptor, muralist and one of the pioneers of Contemporary Indian Art, Shri Satish Gujral. The nation will always remember his contributions in the field of art and culture." Lok Sabha Speaker, Shri Om Birla also condoled his death. He said, "Saddened to hear the news of the demise of renowned painter, sculptor and writer Padma Vibhushan Shri Satish Gujral ji. He shall be remembered for his unique artistic imagination, intellectual fervour and multifaceted personality."

Satish Gujral's career in art began when in 1939 he joined Mayo School of Arts, Lahore to study Applied Art. Thereafter he moved to Bombay in 1944 and enrolled in JJ School of Arts, but had to discontinue due to a recurrent sickness. In 1952, he got a scholarship to study at Palacio de Bellas Artes in Mexico City where he was apprenticed to the internationally-renowned artists Diego Riviera and David Alfaro Siqueiros. Their strong influence is seen in Satish’s early artistic creations.

As an artist-turned-architect, he designed many buildings and complexes not only in India but abroad also. Prominent among these are the Embassy of Belgium, New Delhi, India Islamic Cultural Centre, New Delhi, Indira Gandhi Centre for Indian Culture, Mauritius, Al-Moughtara Farm, Riyadh, Goa University, Goa, Computer Maintenance Corporation Office, Hyderabad, and Embassy of India, Kathmandu. His design of the Embassy of Belgium that made him famous overnight was selected by the International Forum of Architects as one of the finest buildings built in the 20th century.

Dr SS Bhatti describes him as, "A beautiful human being in the letter and spirit of the phrase and the most original, versatile, prodigious, and prolific artist of India who, for his awesome creativity, actually belongs to the world." Dr Bhatti termed Satish Gujral as "The Leonardo da Vinci of India."

Renowned artist, Prabhinder Lall recollects his meeting with Satish Gujral and says, "I remember meeting him during my visit to 11th Triennale India - an International Exhibition of Art and Architecture in 2005. He was indeed a noble person and finest artist and architect. I had a chance to visit the Belgian Embassy, new Delhi designed by Satish Gujral. I admire his most amazing design in brick texture that seems to be a challenging assignment. Art fraternity will miss him forever."

Architect Yashinder Bahga who worked with him in 1984, shares many memories of working with the doyen of Indian art and architecture. Having observed Gujral's works closely Yashinder says, "There was an artistic consistency in all his creations, be it a painting, mural, sculpture or building design. All his works portray the same level of excellence. I am privileged to have worked with such a great artist and architect."

On the sad demise of Satish Gujral, the author requested Professor DS Kapoor, an Indian artist, art historian and former Principal of Government College of Art, Chandigarh to write an obituary, and he agreed happily. Since Professor DS Kapoor has a close association with Satish Gujral, his writing is considered more authenticated and personal, and thus it is being included in this article.

Satish Gujral: An Invaluable Pearl of the Indian Art

Obituary by DS Kapoor - An Indian Artist and Art Historian

Satish Gujral was one of the greatest as well as the most versatile artists of the Indian subcontinent. He is known for making some of the most exquisite paintings, graphics, murals, and sculptures, apart from indulging in architecture and interior design. Despite a hearing handicap, Satish Gujral has achieved a widespread reputation in the field of art, sculpture, and architecture. He was born on December 25, 1925, in Jhelum, Punjab. At the age of eight, he met with an accident and his injury was converted into a disease called "stimulus". Satish's father decided to send him to Lahore to get him admitted to Mayo School of Arts, Lahore. He completed a diploma in graphics in 1944.

The Burma Shell Company organized a competition "Art in Industry" in 1944 to promote art. Satish also participated in this competition and won the first prize. This prize not only gave him an identity in the field of art, but he also got admission to the famous J.J. School of Art, Bombay. About three years before the partition of India, Satish Gujral joined the J.J. School of Art in Bombay to study Painting. During 1944-47 he came in contact with the Progressive Artists Group in Bombay, which included SH Raza, EN Souza, PN Mago, Jehangir Sabavala, MF Husain, and others.

In 1947, Satish completed a three-year diploma from Mumbai and was planning to start a publishing house, but suddenly his life took a new turn. The Country was partitioned. He painted a series titled "Partition" which gave him an enormous reputation. By this time, Satish had received wide publicity. For some time he worked in the publicity department at Pinjore. After leaving this, he worked as Vice Principal in the Punjab Art School in Shimla. The scenic environment of this place was most suitable for his art, but the environment of the school was politicized and unfavourable for him. After this, he started living with his elder brother Inder Kumar Gujral who was 6 years older than him and was living in Delhi.

One day Pandit Jawaharlal Nehru saw Satish and asked him to paint his portrait. Satish not only made his portrait but due to this, his brother Inder Kumar Gujral got an entry to the Prime Minister's house which was very useful for him for his future political career. Since the beginning of his career, he has won several awards and honours such as the National Award for Painting -1956 and '57; National Award for Sculpture -1972; State Honours from the Government of Punjab -1979; and the Order of the Crown, Belgium, for Architecture -1983; He has won an equal, if not more, acclaim as an architect.

His building of the Belgium Embassy in New Delhi has been selected by the International Forum of Architects as one of the one thousand buildings best built in the 20th century around the world and dozens of documentaries have been made on his work. Since the late 1980s, the paintings and sculptures of Satish Gujral have shown a greater expansion, both in terms of materials as well as the content. He started making large murals, mostly in mosaic and ceramic tiles.

Citizens of New Delhi honoured Gujral as one of its 25 citizens who in the last 50 years brought the city on the world map. He also won the 'Leonardo da Vinci Award' for lifetime achievement. Satish Gujral is described as a living legend, one of the few who have consistently dominated the art scene in India in the post-independence era.

In the year 1956 when Satish's art exhibition was on, several people came to see the paintings. Out of them, there was a girl named Kiran. Incidentally, she was also a student and lover of art. Satish and Kiran decided to marry and tied the knot in 1957. After getting a diploma from the Delhi Art College, Kiran dedicated her life to art just like her husband. Their two daughters and one son are also following the path of their parents. All three studied architecture and adopted it as a profession. Satish also developed the habit of writing. He wrote four books one by one and then decided to write his autobiography, which was published in 1997.

Satish was still busy with its work and desires to do a lot more in the future. He passes away in Delhi at the age of 94 after a prolonged illness. We have a long relationship with Satish Gujral. My father, Master Sujan Singh was his classmate when they were studying together at Mayo School of Arts, Lahore from 1939-1940. PM, Modi condoles 'versatile and multifaceted' artist's demise. “Deepest condolences on the sad demise of an acclaimed artist. Passing away of Satish Gujral will leave a deep emptiness in the world of art. May his noble soul rest in peace!

Salute to the legend. 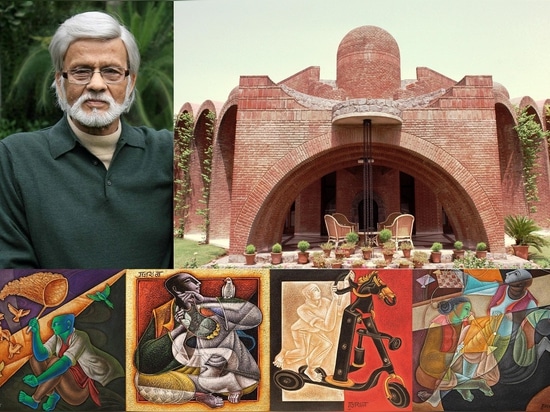 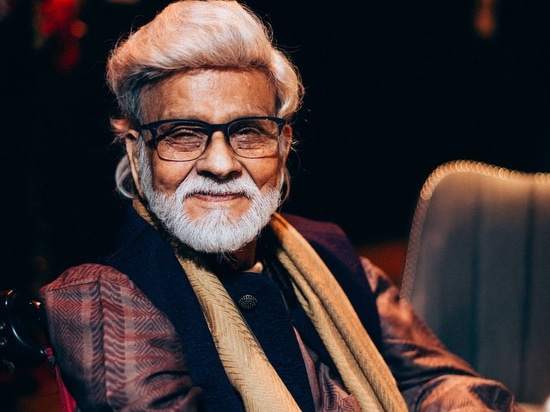 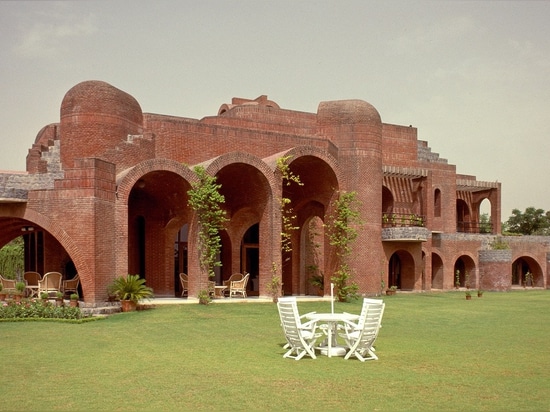 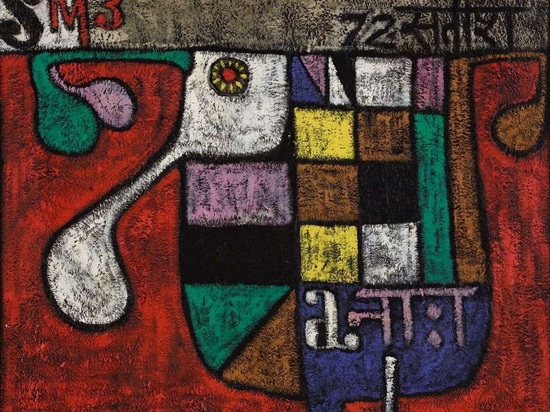