It’s been just over one year since a massive structural fire raged through Paris’s Notre Dame Cathedral, a moment that both deflated the collective spirit of France and horrified those across the world who have either visited the 850-year-old edifice or admired its emblematic beauty from afar.

And despite contamination– and global pandemic-prompted work stoppages and some light Gallic sass-slinging, Notre Dame is still on track to be open to the public by 2024.

One major sticking point, however, continues to be the cathedral’s toppled spire, a nearly 300-foot-tall Paris landmark that was designed in the mid-19th century by thirty-year-old architect Eugène Emmanuel Viollet-le-Duc as a replacement for an earlier, storm-beaten spire that was removed several decades before. The contentious issue at hand is the question of whether or not the spire that will eventually replace Viollet-le-Duc’s famed flèche should be a faithful replica of the barbed original or something that embraces a reverent but more modern design.

The latter route, one very much not endorsed by preservation groups and the French Senate, was initially promoted by the administration of French President Emmanuel Macron. “Since the spire wasn’t part of the original cathedral, the President of the Republic hopes there will be some reflection and a contemporary architectural gesture might be envisaged,” read a statement released by the Élysée Palace shortly after the fire.

Yet as reported by The Art Newspaper, plans to formally move forward with an international design competition seeking out new spire designs, which was first announced by Prime Minister Edouard Philippe, have apparently stalled. “The international competition will allow us to ask the question of whether we should even re-create the spire as it was conceived by Viollet-le-Duc,” Philippe said at a press conference held two days after the tragic fire. “Or if, as is often the case in the evolution of heritage, we should endow Notre Dame with a new spire.”

Or at least that’s according to acclaimed U.K.-based Flemish artist Wim Delvoye, who says church officials have “so far snubbed” his own proposed fireproof design. Per The Art Newspaper, Delvoye, known for, among other things, creating neo-gothic sculptures fabricated from laser-cut steel, announced his intention to enter the competition shortly after it was announced, and immediately set out to work on designing a first proposal with his team. Other designers and architects also quickly sprung into action with some, ahem, interesting proposals although, as hinted at by Delvoye, the competition may now be at a standstill.

“The longer the French wait to decide—or to start a competition—the more they will need to rely on my technique and design [involving] laser-cut Corten steel,” he said. “They are going to discuss [the spire design] for ten years.”

According to The Art Newspaper, France’s National Commission for Architecture and Heritage is not expected to furnish design recommendations for the replacement spire to the Ministry of Culture until later this year. 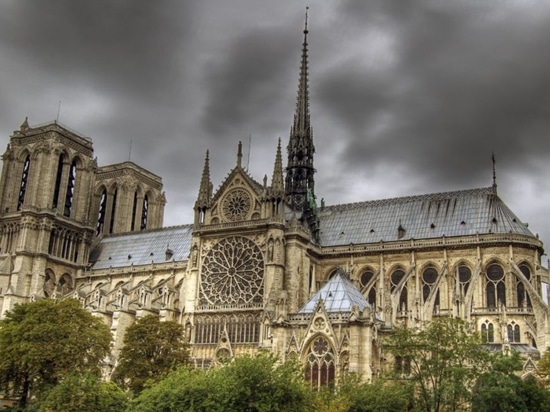 Notre Dame Cathedral and it's iconic (younger) spire pictured in 2008