Like so many others around the world, the Brooklyn-based design studio Coil + Drift had made big plans for 2020, including a return to the International Contemporary Furniture Fair (ICFF) this May to present its latest collection.

Despite being forced to pivot, the six-year old company’s founder, former dancer and self-taught designer John Sorensen-Jolink, has embraced an attitude of fluidity that also happens to figure heavily in his latest body of work. Entitled ‘Hone’, the four-piece collection, which will now be unveiled digitally throughout the course of the year, is rooted in revisiting past designs.

‘For this collection I asked the questions: what I would do differently if I had the chance? How can I show that Coil +Drift is alive and ever-evolving? Because I don’t have formal training as a designer, I rely on the training that I do have, which is very much time and movement-based,’ says Sorenson-Jolink. ‘I see form in a very three-dimensional way and how this is visible in my practice is that the objects [I create] tend to look different at every angle. That [spatial] awareness definitely comes from understanding human scale and how we relate to objects.’

The process of retracing steps not only saw Sorensen-Jolink reach out to existing clients for feedback on how the pieces were being lived with and thinking about how each could be done better, but also digging into his archives for past concepts that had not yet been realised.

In the first aspect, the collection features a new and improved version of the studio’s popular Hover shelving unit, which was originally designed in 2014. Versatile and highly customisable, this now features an updated materiality, which has been elevated to match the rest of Coil + Drift’s collection.

‘We were using very rustic materials, which were very of-the-moment during the early and mid 2000s. The wood was reclaimed scaffolding and the metal was iron plumbing pipe, which was very trendy,’ explains Sorensen-Jolink. ‘That’s now been elevated with domestic hardwoods that are FSC certified and sustainably harvested, but experiment with new methods of finishing, like sandblasting the wood for a beautiful and textural feel, and staining it to resemble how wood would naturally grey over time.’

This is complemented by hand-machined solid brass components, which have also been aged by hand in-house, for refined overall effect. The unit’s engineering has also been updated so that the shelves can still be moved around as you like over time, despite custom-designed and installed in the home.

‘Instead of using a clamp that the shelves would rest on, we’re using pins that pierce through the main pipes and can be removed to move the shelves. The pins also rest inset into the wood on the underside of the shelf, and are only half exposed. I was really thinking about how we could focus in on the idea of hovering even more,’ he explains. ‘The pins also provide a much more stable platform for the shelves. The new unit is much stronger than the original. It’s moved away from a shelving unit to a shelving system.’

A design from 2017, this is a chair which Sorenson-Jolink had originally envisioned as a polished chrome frame with an upholstered leather cushion laying on top. Inspired by the profile of a stiletto heel shoe, the design has instead been brought to life as a fully upholstered piece – the studio’s first such undertaking - in burnished gold Maharam mohair fabric.

‘The year I designed the chair, I also planned to introduce several strong wood pieces (the Soren dining collection and Sylva daybed) at ICFF,’ the designer recalls. ‘It was not the time for polished chrome or leather and it wasn’t time for that much curve – I almost remember feeling like I was not ready for that kind of curve. Now, it’s very much what’s on my mind when I’m drawing new things.’

He adds, ‘I’ve always had this chair in the back of mind, I’ve known that I wanted to make it at some point. At the same time, I was very interested in doing more upholstery work. I’ve worked with 3-4 upholsterers, but it wasn’t until I found this current [upholsterer] with this level of communication and trust that I could open myself up to the possibility of [making a piece]. I started to draw [with that in mind]] and realised I already had the chair design – I just wanted it to be in upholstery.’

Coil + Drift’s pieces are all made to order, and because its operations depend on eight different fabricators, they are all currently on pause. However, the studio continues to receive new orders for pieces in the current pandemic. Both these pieces, which Sorensen-Jolink installed and photographed for us in his Brooklyn home, also made their public debut this week as part of Sight Unseen’s inaugural digital design fair, Offsite Online. All together, Coil + Drift’s fluid approach doesn’t just echo the cadence of ebb and flow in life, but also serves as an uplifting reminder that these times too, shall soon pass. 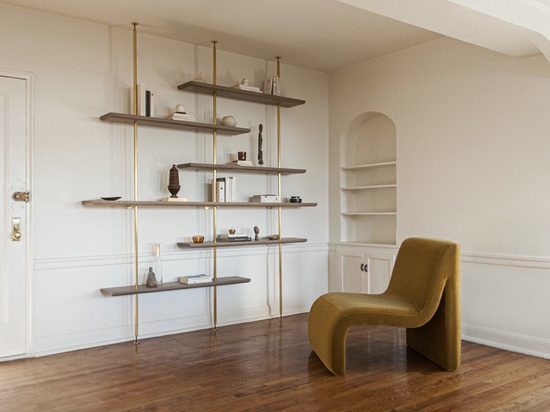 ‘Hover’ shelving in white oak and gently aged brass, $14,487, and ‘Talon’ chair in Maharam Mohair Supreme fabric, $11,482, by Coil + Drift, photographed for Wallpaper* by their designer John Sorenson- Jolink in his Brooklyn home 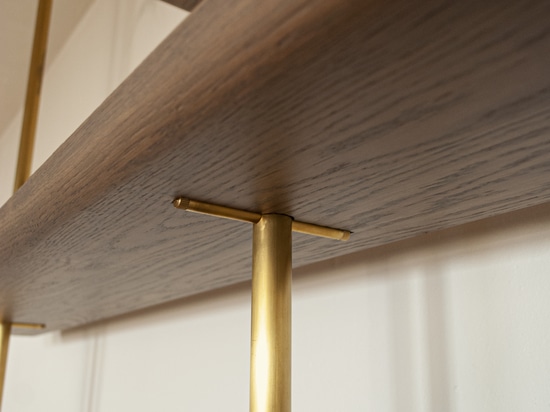 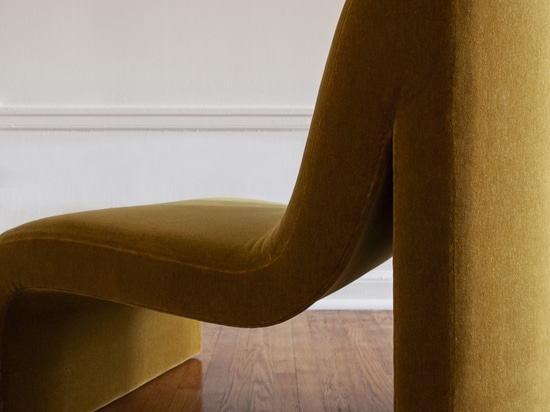