The future of cinema lies in the evolution of its architecture

In order to survive, after a hundred years in which it has changed very little, the cinema must rethink itself by turning into a more comfortable space with fewer screens and many services.

The cinema has changed very little in the first 100 years since it was invented. Sound was first introduced in 1927, widescreen between the 1950s and 1960s, multiplexes in the 1990s (the real great revolution), and then came the stadium-style seating arrangement (where seats are placed higher than the seats immediately in front of them) – and that was it. The projection and sound diffusion technologies evolved a lot more, but the construction and design of the movie theatres not as much. Besides following styles and trends of the various decades, there has not been much innovation, so the concept of what a cinema is has remained the same. Now, at the time of the world’s greatest cinema crisis, a new concept of cinema is making its way, starting with a different use of space aimed at revisiting the social function of cinemas. And the numbers seem to prove that this is the future of cinema.

The owners themselves call them “premium cinemas” to differentiate these newly designed cinemas from the more traditional ones. They are usually facilities with fewer screens and designed to present themselves as premium experiences. They are more comfortable, have a warm and very custom-designed décor, and feature study rooms, bookshops, bistros, and cafés. And then there are the screening rooms. The premium cinema is not just an improvement of the film offer, but rather an expansion of the concept of the movie theatre, which goes from being a place where to simply watch a movie to a cultural hub, a place to spend time even without watching movies, a place where humanity and ideas can come together.

Changing the idea of cinema

This is quite an ambitious project. At a time when the competition represented by ever-larger TV sets and original and unprecedented entertainment options offered by the streaming platforms risks marginalising the cinema to the benefit of the living room (when the films by the most important authors that win festivals and Oscars arrive on TV first, it is difficult to find reasons to leave home and spend more money to see perhaps worse films), theatres want to change the way people think of the movie theatres starting from the architecture of the spaces. The cinemas that have opened since the 1990s were inspired by the functionality of the spaces and architecture of shopping centres, very similar non-places in which to spend money. Premium cinemas want to be the opposite. They want to establish themselves as part of a community – the community of people who see movies in cinemas – by offering a welcoming atmosphere and the pleasure of moving around in an aesthetically stimulating and conceptually daring place.

It is not an entirely new thought, since over the last 20 years films themselves have increasingly sought to establish themselves as incredible, magnificent, unique, and unmissable experiences, in order to make people want to pay for the movie ticket. They have done this with ever more ambitious and expensive productions, stories that are ever more gigantic and technically so complex as to convince audiences that those films “deserve the be seen in the movie theatre”. Above all, they have done it by relying on powerful marketing, which starts even a year before the film’s release in the case of the most expensive ones. Only in the theatres can one see Batman, Fast & Furious, or Christopher Nolan’s latest film before everyone does, and only in the theatres can one fully enjoy their qualities, because these films fully exploit the big screen, great sound, and advanced technologies.

The result is that streaming platforms can now offer the best cinema with a low rate of spectacularity but with a high rate of ideas, sensitivity, complexity and good writing (following the example of what TV series have done for 20 years now). After the disaster and desert of the pandemic, which emphasised this transformation, cinemas are now struggling to regain the audience they had in 2019. However, the premium ones seem to be struggling much less.

The rise of premium cinemas

In 2021, at CineEurope, the largest European convention for cinema exhibitors, Mark Way, managing director of one of the world’s largest movie theatre chains, AMC, stated that “people are searching out quality and a premium experience” and – citing the 47 theatres the company had turned into premium theatres (out of a total of 340) – claimed that “these are the parts of the business that are recovering fastest; people are coming back to premium experiences, that’s what they want”. Even at the same convention, Tim Richards of Vue Cinema (another global chain) explained in more detail that after renovating many of their theatres, they realised that, for example, recliner seats are “one of the few game-changers”.

And if this is true for large multiplex chains, it is even more true for medium-sized or smaller cinemas that are starting to reopen after being closed for years due to the pandemic. If multiplexes have been renovating the interior of their movie theatres and improving comfort for a few years before the pandemic, it is the new and smaller cinemas built over the last 6-7 years that have started to successfully experiment with the idea of premium cinemas. And now that the worldwide box office is recovering, but is still 60% down compared to 2019, it is precisely the films usually hosted by the medium-small cinemas that are suffering. Which is another way of saying that it is that audience there, and not that of big multiplex superhero films, that is the most difficult to win back. For all films that do not boast impressive marketing and great entertainment, it is the structure that makes the difference: the welcoming atmosphere, the experience of going to the cinema that does not stop at the comfort of the seats (although crucial) but begins in the lobby and with the clear perception communicated by the architecture of the place of being in a special, beautiful, sophisticated and refined place.

The situation in Italy

In Italy, a country in which returning to the cinema has proved to be much more difficult, complicated and slower than in the rest of Europe (the revenues in 2021 were 73% lower than in 2019), the need has been such that even the Minister of Culture Dario Franceschini has promoted the idea of premium cinema as a way out of the crisis: “Many Italian cinemas are old and should be renewed and made more welcoming. [...] The difference today is no longer between small and big screen, but between collective and individual experience [...] and this must also be perceived in the way of sitting, in the experience of the cafeteria and study rooms. Those who do this do not have to face the difficulties that others are facing”.

These words were pronounced during a press conference announcing that the Italian state (through the national film school Centro Sperimentale) had purchased a historic cinema in the centre of Rome that had been closed for years. This will become a premium cinema with an audacious objective: to attract audiences with a programme of films neglected by other theatres, that is, those that are less in demand and less publicised. All the experiences of this kind, both in Rome and in the rest of Italy and then in Europe, tell us that it is possible, that the creation of a space that in itself tells those who enter it that it is a cultural meeting point, also promotes the enjoyment of more complex films, attracting an audience that is not necessarily made of cinephiles but that feels part of the city’s cultural community and has a desire to relate to those it perceives as its peers.

If indeed the premium cinema concept will be able to overturn the fortunes of movie theatres as the numbers currently say, it will be one of the best examples of how the architecture of places can change the idea that the people who pass through them have not only of those places, but also of the function and role that what they lost has in society. 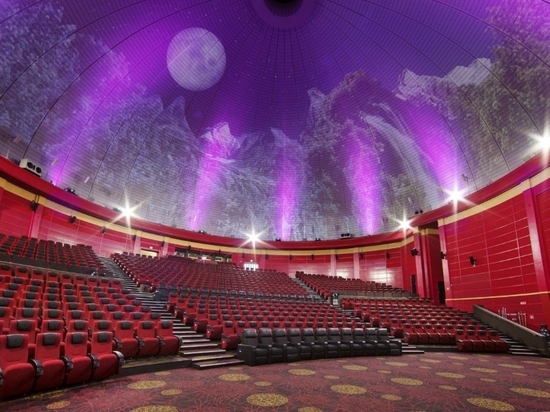 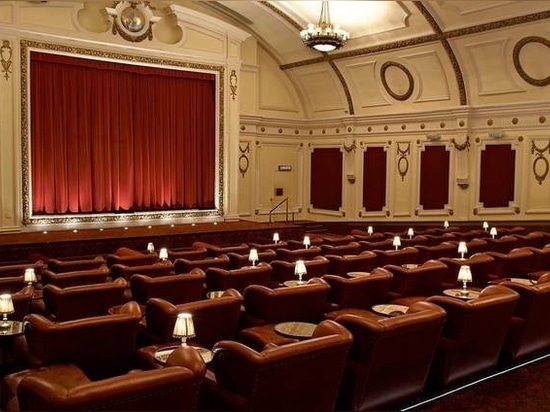 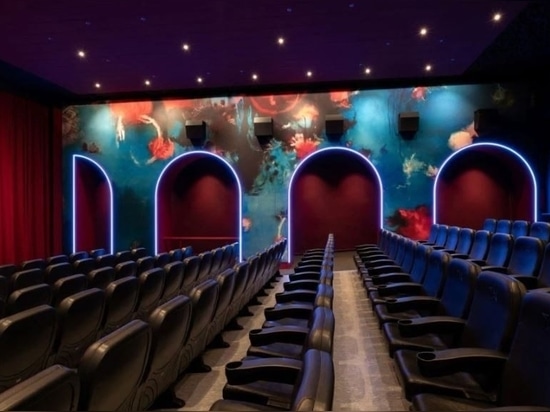 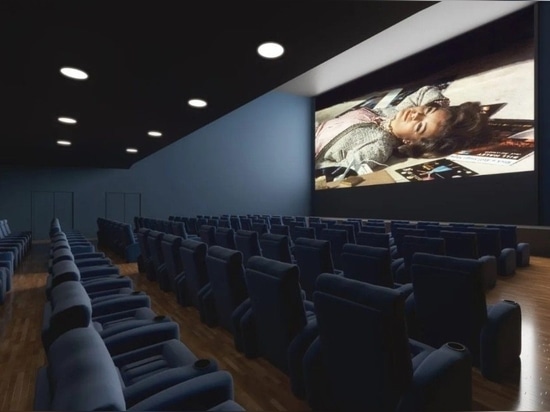 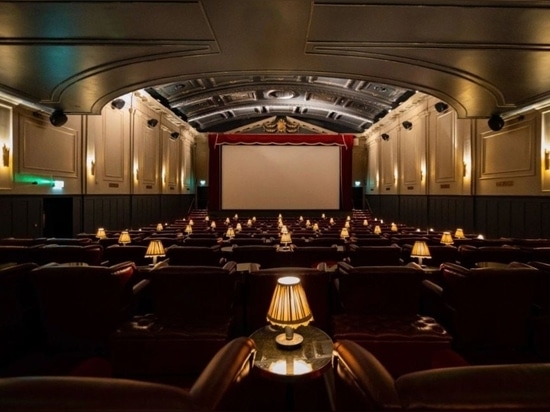 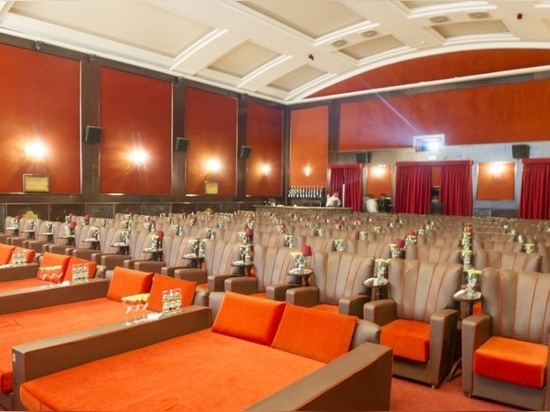