The Heat is Off: natural cooling in architecture

Long before the advent of air-conditioning, lo-tech means of cooling buildings were well established. Now, architects worldwide are rediscovering the sustainable benefits of natural temperature control through clever design.

Spending a summer in southern climes, one learns quickly how the holiday house can be kept comfortable despite high daytime temperatures: closed shutters shield the rooms from overheating during the day, and cross-ventilation cools them at night. This simple principle of cooling by means of natural ventilation and protection from the sun can be incorporated at the architectural design level and optimised through structural measures and greening, thereby reducing or eliminating the need for additional mechanical cooling systems.

Some sites even allow open roof and wall constructions. When the Swiss architects Herzog & de Meuron were commissioned to design a sport and multifunctional centre in Natal, Brazil, they took advantage of the mild tropical climate and the coastal setting to employ such a concept. The building, completed in 2014, is part of the larger-scale town-planning project ‘Urban Vision for Mãe Luiza’. The new gathering place is intended to set in motion an upgrading of the favela Mãe Luiza.

A simple, exposed steel girder construction spans the central sports area as well as the adjoining spaces and spectators’ stands. The structure is covered with corrugated aluminium panels that are offset from one another to permit wind to pass through yet keep rain out. The panels also block the sun’s direct rays, but allow indirect light into the interior. Perforations in the meandering concrete façade, which was fabricated on site and defines the interior spaces, additionally promote air circulation. The roof and walls thus form a translucent and permeable envelope that sufficiently shelters the enclosed space from outside views while both enabling rising warm air to escape and utilising the ocean breeze for cooling. No additional mechanical air conditioning systems are required.

In Stacking Green, built in 2011 in Ho Chi Minh City, the Vietnamese firm Vo Trong Nghia Architects also made use of the filtering and guiding of sunlight, as well as thermal updraft and cross-ventilation, for natural temperature control. This detached house is also located in a tropical climatic zone and benefits, as the name suggests, from its greened facades and roofs. Open planted facades hung before the short sides of the narrow, four-storey house serve as green filters, offering visual privacy from the outside and shading the interior spaces while also allowing plenty of daylight to penetrate. The windows can be opened for air circulation without exposing the interior to view. The importance of the garden and the preference for open living spaces in Eastern cultures figured strongly in the design. These elements were combined with the advantages of natural cooling and ventilation, giving rise to a sustainable building that unites tradition and innovation in a simple manner.

In more-northerly climes, too, buildings can be found that employ natural systems for temperature control, even if the structures used here cannot be as open as those in tropical regions. A project of far greater scale and functional complexity is Henning Larsen Architects’ 2014 university building in the Danish city of Kolding.

The rather unusual shape of the ground plan, an isosceles triangle, is echoed in a more elongated form in the facade design. The mobile facade elements of perforated metal make up the outer enclosure. The degree to which they are opened controls the intensity of light in, and thus the warming of, the building’s interior. This curtain facade system enabled the architects to create a fully glazed inner facade that allows natural lighting without causing overheating in summer or high energy losses in winter. At the same time, the outer facade, which changes according to the time of day and position of the sun, gives the building a distinctive exterior, resulting especially from the expressive play of open vs. closed, and thus bright vs. dark and light vs. shadow. The atrium, which likewise takes up the triangular form in variations through all five storeys, additionally contributes to comfortable interior temperatures by means of night-time cooling.

SOM pursued a different strategy in the conception of a university building completed in 2013 for The New School in the New York district of Greenwich Village. The 16-storey structure functions as a campus for eight faculties, some of which are distributed in the immediate vicinity. Along with various instructional spaces, it comprises a library and a residence hall. To reduce warming and decrease heat loss, the architects limited the proportion of exterior glazing in the building to 35 per cent. The interior nonetheless receives ample daylight due to the optimised orientation of the window surfaces, which alternate with sheet copper cladding to order the facade. In addition, a greened roof reduces the urban heat island effect while also directly cooling the surrounding air.

Long before the invention of air conditioning at the start of the 20th century, natural techniques were used to cool buildings. Taking advantage of climatic conditions and thermal effects as well as the appropriate use of shading and greening still offers diverse possibilities for natural temperature control. The projects presented here show that these techniques serve not only as means to various ends, but can be employed as actual design elements and thus made an integral part of the architecture. 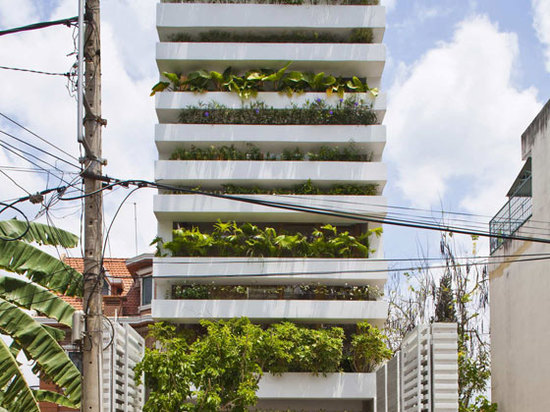 The hung planters forming the facade of a detached house by Vo Trong Nghia in Ho Chi Minh City allow variations in plant height and type. The plants are watered automatically by means of an integrated system; photo: Hiroyuki Oki 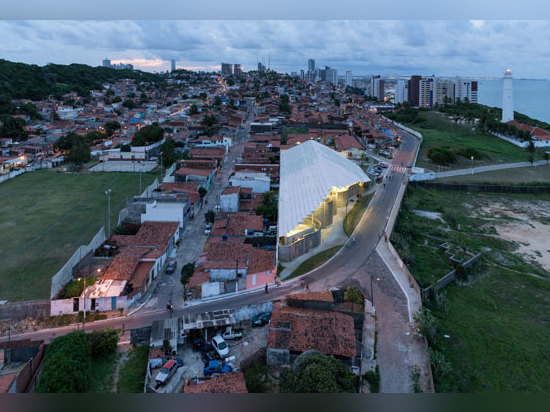 The Arena do Morro stands out from the fine-grained, colourful favela structure due to its size and bright appearance. It creates a new public space that is visible from a great distance; photo: Iwan Baan 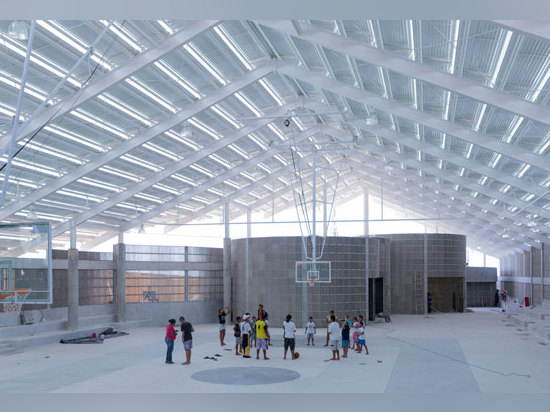 At the heart of the open building lies the sports area with its surrounding spectators’ stands. The various round function and sports rooms adjoin the central space on its short sides; photo: Iwan Baan 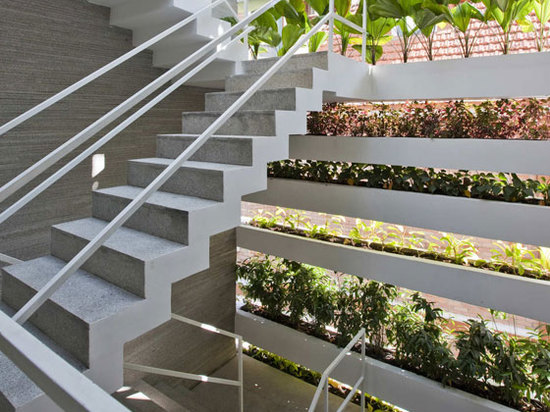 The open staircase of the detached house by Vo Trong Nghia forms an atrium that connects all storeys and functions as a filter between the interior and exterior space. It additionally allows warm air to escape upwards as in a chimney; photo: Hiroyuki Oki

The panels of the curtain facade enveloping Henning Larsen Architects’ university building in Kolding, Denmark, open and close with the changing position of the sun and intensity of the light; photo: Martin Schubert 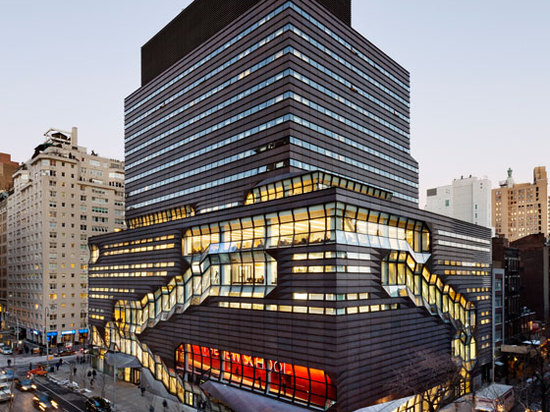 The circulation and common spaces of the SOM-designed university centre in New York appear to wind around the building. From the outside, they are set off visually from the sheet-copper cladding; photo: James Ewing