The depiction of how to enjoy life

"We needed someone to help us showcase our space in the best way possible, and Nina [Santa & Cole Indoor Editor] lit the way for us from the start of the project." - Casa Bonay: In the Making, 2015.

Nestling in the midst of the Eixample, one of Barcelona's most iconic neighbourhoods, the Casa Bonay has transformed a building dating back to 1869 into a hotel that depicts the Mediterranean and Barcelonan lifestyle. The renovation confers a contemporary vision while preserving many of the original architectural features that respect the building's original spirit, such as the hydraulic tiled floors, the ceilings and sliding doors.

"We're from Barcelona and we're Mediterranean through and through: we believe you can experience time differently and we like to share that with others." - Inés Miró-Sans, co-founder of the hotel.

The Casa Bonay is also a place to get to know the city's talent, a reflection of a lifestyle which has authenticity and curiosity at its heart.

An eclectic team mostly from Barcelona worked on the project, including furniture designers, interior designers, graphic designers and landscapers*. This host of characters and personalities breathed new life into the image of the house, turning it into a building whose every nook and cranny conveys Barcelona's quality of life and very essence.

Nina Masó, an editor and co-founder of Santa & Cole, was involved in the Casa Bonay lighting project from the outset.

"Inés sought to build harmony among the entire team, for us to share ideas, talk and bring in our own vision. That was the really nice thing about the project." - Nina Masó, Santa & Cole Indoor Editor.

The Santa & Cole Catalogue, which shares the warm Mediterranean feel that the hotel was after, therefore became part of this project through the lighting.

Very often when you're in a hotel, you feel like you could be in any city in the world, but the interior design of Casa Bonay actually makes you feel you're in Barcelona. From the start I totally understood the concept Inés was looking for. I really identified when she told me how she imagined her hotel; I liked it. It's the vision I would've had if I'd set up my own hotel in Barcelona. Feeling at home - that was the interesting bit." - Nina Masó, Santa & Cole Indoor Editor.

As befits a home, every room in the house has its own personality. The intention was to bring out the characteristics of each space, creating little comfort zones where you can relax and feel easy.

A majestic entrance leads into the hotel through what was originally the coach gate, which is lit with the solemn and elegant Estadio light by Miguel Milá. This iron ring of light was originally designed for the Olympic Stadium during the 1992 Barcelona Olympic Games.

Libertine is the bar-restaurant situated in the hotel lobby, a place to eat well and relax, chat, work, drink tea, or simply be. This space is lit with Antoni Arola's Cirio, inspired by the great lamps of the Hagia Sophia Mosque in Istanbul. The more intimate Básica Mínima lamp was chosen to accompany evenings at the Libertine tables, a time when less intensity is required. or the shared tables, however, we opted for the essential shapes of the BlancoWhite lamp, also by Antoni Arola.

The Comodín lamp, with its red ribbon shade, helped us to highlight the original baTabasTa prints that decorate the reception bathroom walls.

"I was absolutely certain that Miguel Milá's designs, one of the best examples of design in Barcelona, should be present. Choosing his lamps was the best way to emphasise the city essence", explains Nina Masó. You can therefore find such pieces by this great Spanish designer as the Wally wall lamp lighting the way for visitors through the corridors and in the courtyard. The warm and simple TMM wall lamps above the hotel's bedside tables take of nighttime lighting needs. In rooms with lower ceilings, the filtered light of the Maija de suspensión pendant lamp was chosen instead, designed by Ilmari Tapiovaara in 1955.

For the glazed balconies, the eastern tranquillity of the Nagoya lamp was chosen, designed by Ferran Freixa in 1961. And Miguel Milá's M64 shines a light for reading on the sofas in the lounge area. 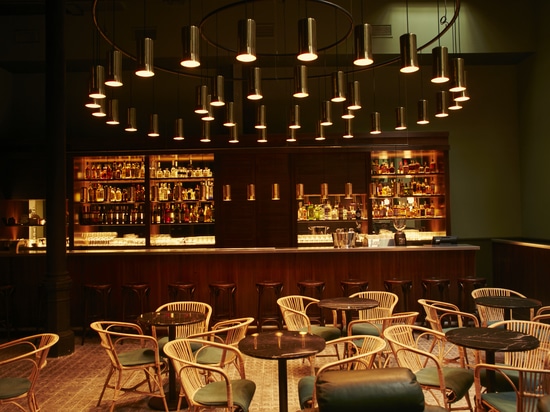 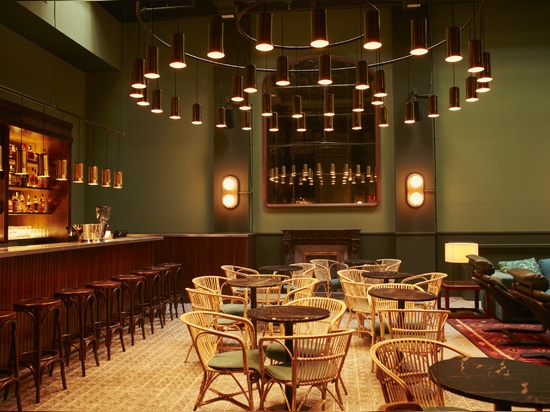 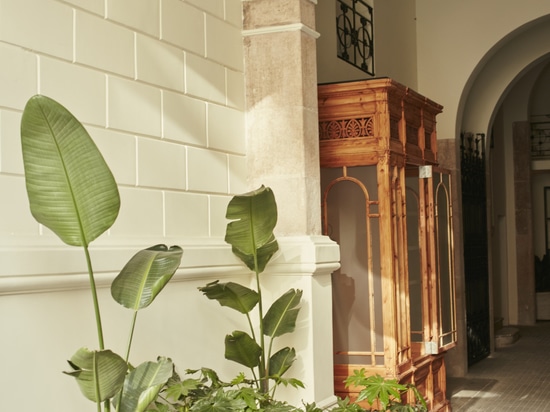 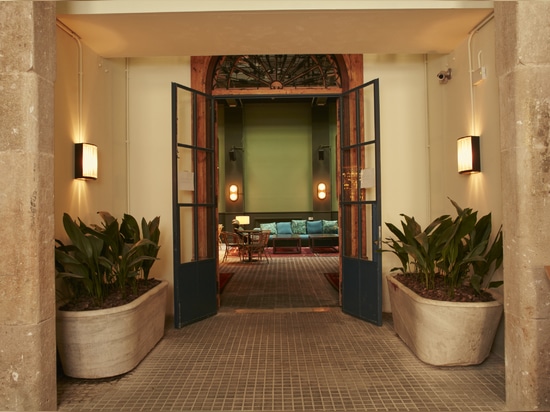 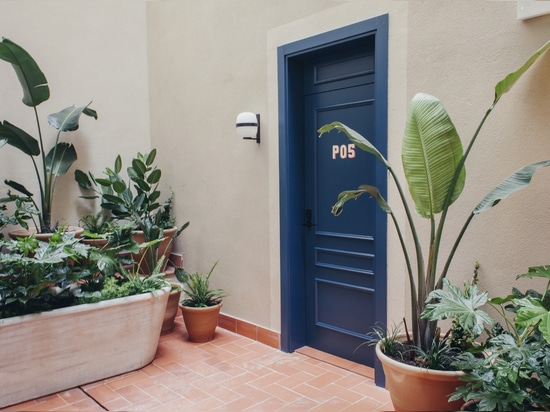 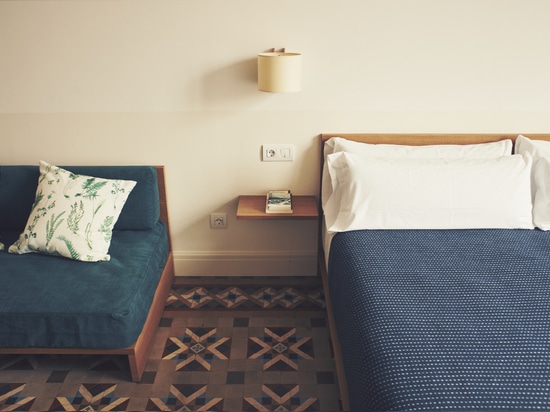 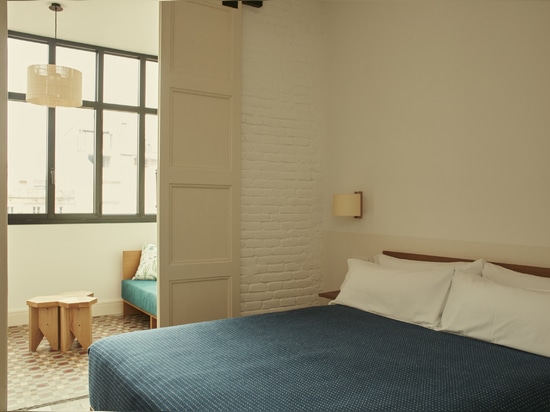 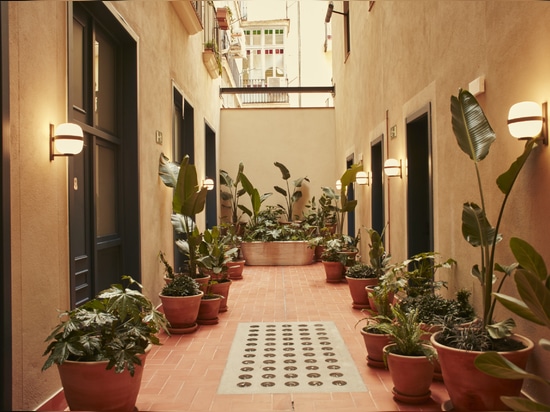 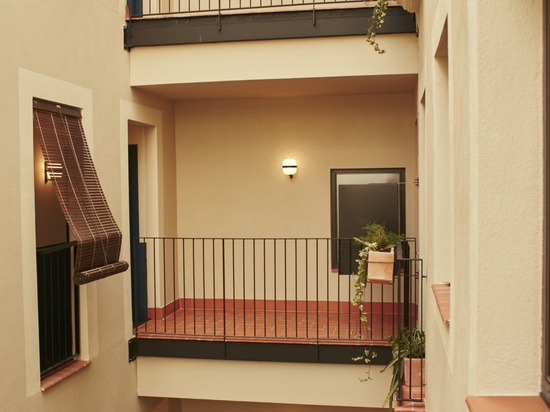 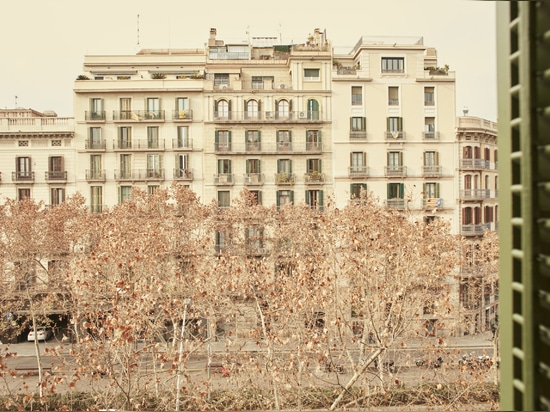 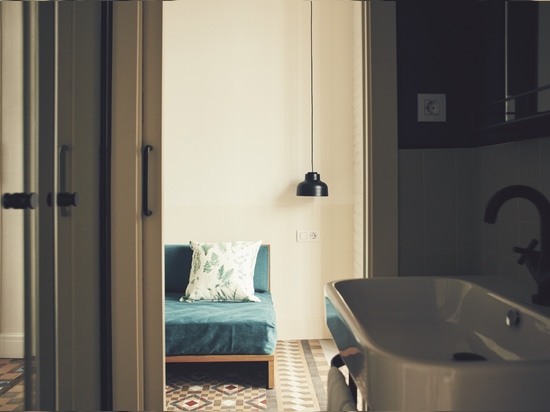 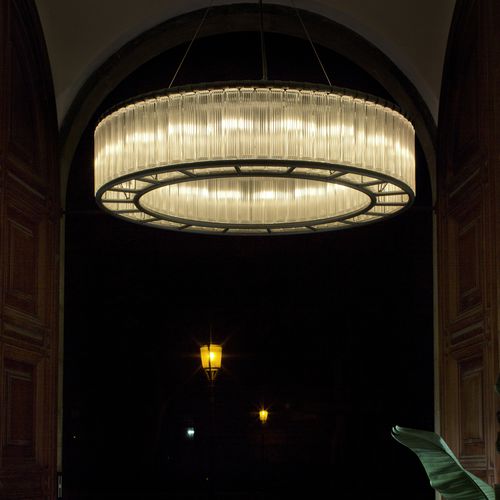 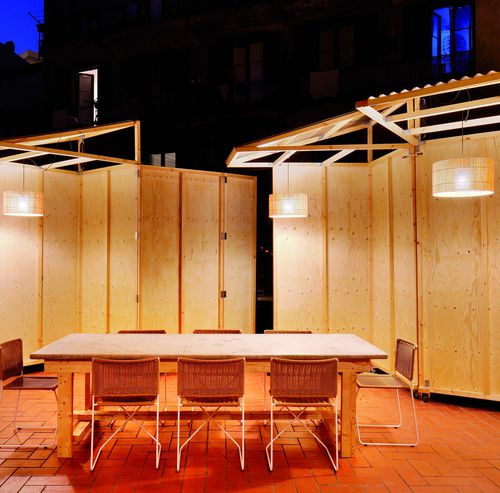 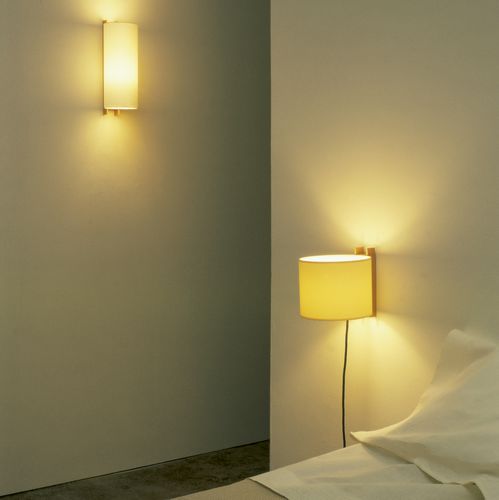 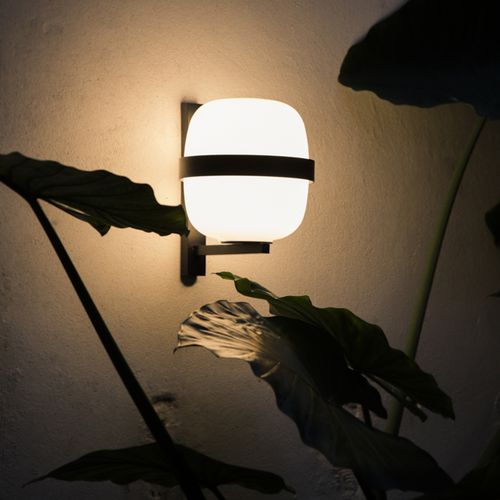 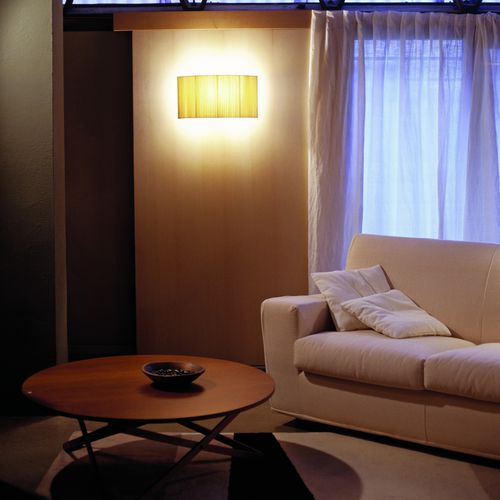 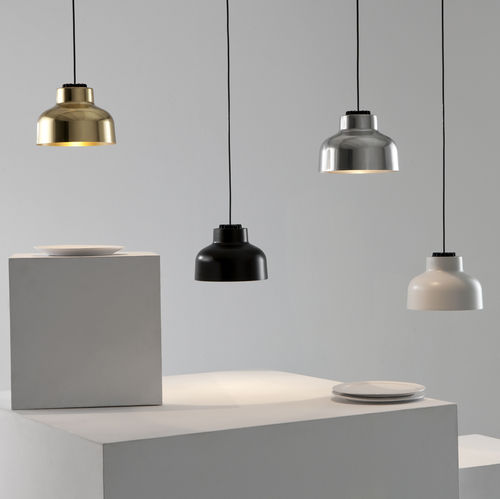 A companion for adventures and quiet times

A product, Cestita Alubat, and a place, our headquarters in Parc de Belloch (Barcelona), together they tell this story that begins with daylight and ends with the darkness of night. A story of adapting to a new existence, of trying to compose a new reality, a singular moment of truth. Cestita Alubat is the latest addition to the Cesta family. Robust yet lightweight... 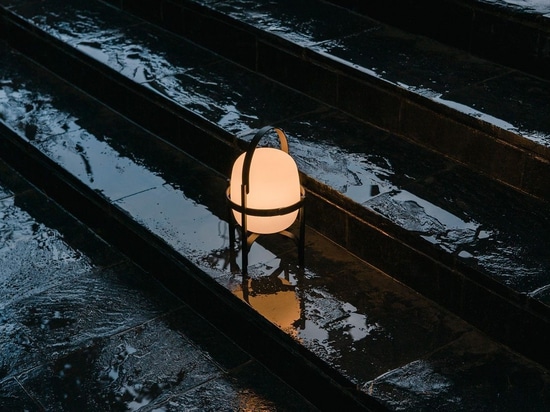 Designed for outdoor spaces where furniture is required for leisure, it comes with FSC-certified wooden slats in two sizes. 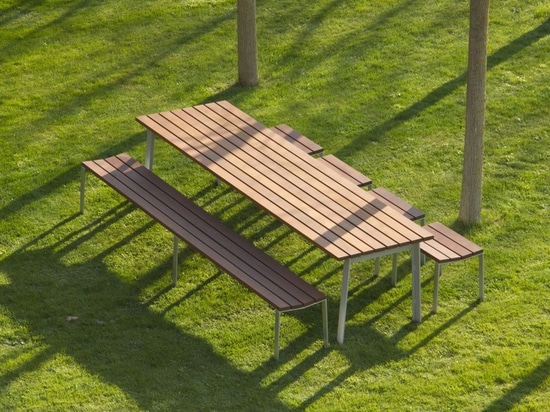 In 1974 the architects Enric Sòria and Jordi Garcés designed Sylvestrina, with the intent to reproduce the effect of an oil lamp through its formal simplicity. Forty-six years later, Santa & Cole re-edits Sylvestrina. Preserving the original version’s warmth, it is adapted to the LED technology and incorporates a battery to escort the users wherever they desire. Its ... 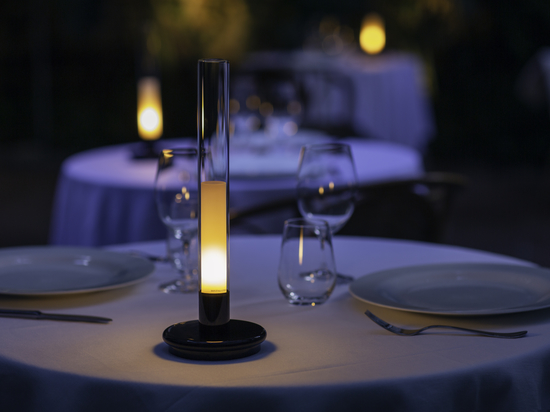 Antoni Arola plays as he designs and designs as he plays. Considered one of the most interesting European designers of his generation, this poet of light, as he is known, elevates us with his work to a dimension that transcends the functional. Arola fuses artistic experimentation with research into light. A mysterious game beyond the realm of the conscious and uncons... 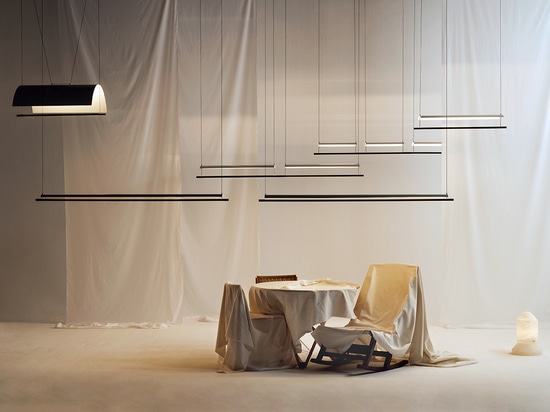 Lámina by Antoni Arola Lámina by Antoni Arola
*Prices are pre-tax. They exclude delivery charges and customs duties and do not include additional charges for installation or activation options. Prices are indicative only and may vary by country, with changes to the cost of raw materials and exchange rates.
Compare
Remove all
Compare up to 10 products