When a square lacks plants…

Urban pots with a seat function

In city squares, we usually don't complain about the lack of space. On the contrary - they are mostly quite large and … without any plant elements. However, it is impossible to set greenery in a natural form – planting trees are hindered by a network of underground infrastructure and lawns need natural substrate.

In the centers of European cities, often it is quite hard to relax - due to the lack of natural surroundings, but also due to the lack of seats. Squares become a purely transit space, a short stop, while traveling through the city. It doesn't have to be this way.

How does it work? The secret lies in the project, which combined two functions - a bench and a large city pot. An additional advantage is easy transport of the container to a destination point - thanks to special grooves in the base, it can be easily lifted by a forklift. A decoration created in this way does not require complicated construction works or the involvement of heavy, devastating substrate vehicles.

A new image of squares does not have to be…the same all the time. One just needs to move the planters to another place to create vast space dedicated for events connected with the celebration of the City Days. Green decorations in the center are and can be mobile almost as much as the inhabitants themselves – and just like them, they are also diverse ... The urban pot with a seat function comes in a wide range of colors - from classic anthracite to hot red. Each city and its center can become unique and exceptional! 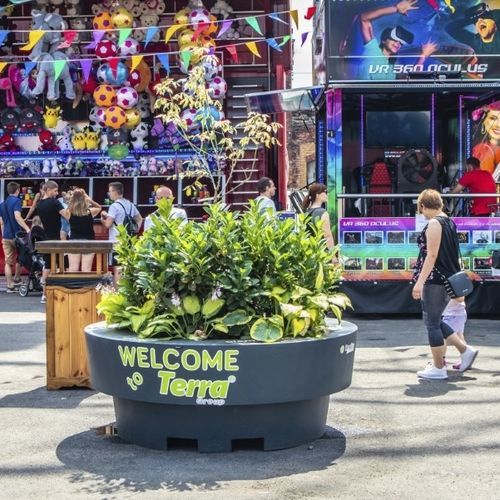 Foresight or spontaneity? In such a special moment, there is no time to make rash decisions, especially when they concern public issues. Although it is only the end of August, it is worth choosing Christmas city decorations already now, including this year's novelty - openwork elements for street lamps and pyramids made of balls. The past few winter seasons have belo...

Soaring, fluffy ornamental grasses are particularly popular - they will look great on terraces next to minimalist buildings, which sometimes require breaking their raw form. Which specimen to choose? This is a difficult choice that we leave to individual preferences - more about ornamental grasses we have already written in this post - click. Modern terraces become an e...

More and more European cities are dressing up for Christmas, among them Świdnik (Poland). Huge Christmas balls and Christmas ball pyramids in a romantic red color turned out to be the hit of last season ... and they will certainly be appreciated this year too! Last winter, one of the most interesting ideas for the Christmas arrangement for the city was chosen by Świdnik...